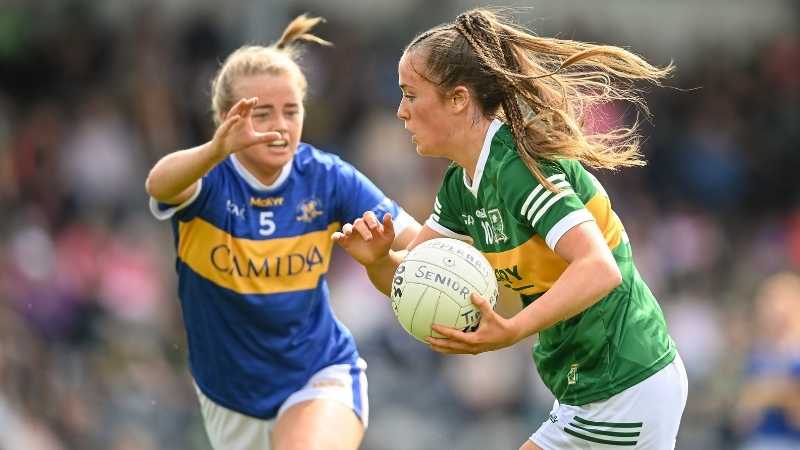 Kerry are through to the TG4 Munster Senior Final following a convincing win over Tipperary at Páirc Uí Rinn today.

Declan Quill and Darragh Long’s changes were full value for their victory, which was built on a commanding first half display highlighted by two Erica McGlynn goals.

The Kingdom, who will play Cork or Waterford in the provincial decider, enjoyed the brighter start with Niamh Ní Chonchúir and Louise Ní Mhuircheartaigh (free) splitting the posts inside five minutes.

Niamh Carmody added to Tipperary’s woes with her side’s third score as Kerry dominated possession and territory for much of the opening exchanges.

Kerry underlined their quality with a superb goal after 9 minutes. Louise Ní Mhuircheartaigh set up McGlynn to palm the ball into the net following a flowing move.

An Emma Morrissey free got Tipp on the scoreboard but their opponents’ response was swift. with Niamh Ní Chonchúir pointing making it 1-4 to 0-1.

Starved of possession and forced on the back foot, Tipp’s massed defence kept Kerry at bay for a time.

The remainder of one-sided first half saw Kerry’s full-forward McGlynn steal in to score a second goal and Emma Morrissey’s frees keep Tipp within touching distance. Yet, Kerry’s 2-7 to 0-4 interval lead was well deserved.

Anna Rose Kennedy and Danielle O’Leary exchanged points shortly after the restart as Tipp enjoyed one of their best spells.

Peter Creedon’s team only had an Emma Morrissey free to show for their efforts, however, and a comfortable Kerry led 2-8 to 0-6 with 15 minutes remaining.

Tipp could have little argument with the outcome and Lidl National League Division 2 champions Kerry will provide stiff opposition for Cork or Waterford in the Munster Final.