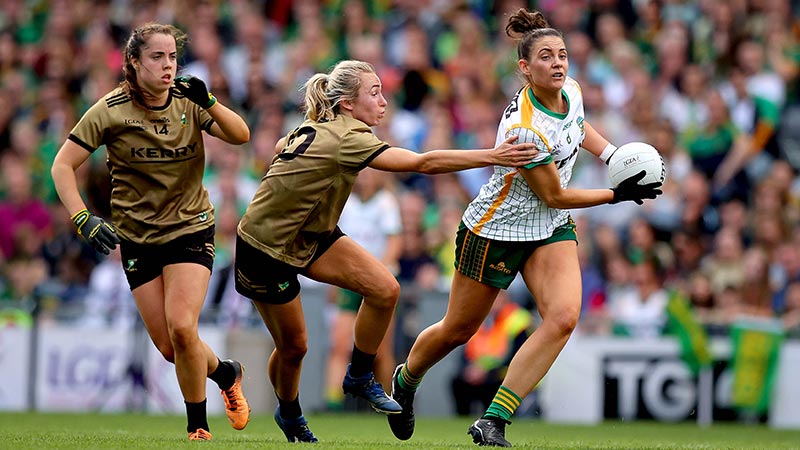 Meath have recorded their second consecutive TG4 Ladies All Ireland Senior Football Championship, defeating Kerry in front of an attendance of 46,440 in Croke Park.

Queen Vikki of Dunboyne leaves for Australia with two senior medals and one intermediate in her back pocket, Meath’s third consecutive All Ireland win, their production line in full flow.

For the Kingdom the wait continues, despite leading early thanks to their red headed warrior from West Kerry, Meath had their number and once more defeated Kerry at headquarters.

Kerry got off to the optimum start Ciara Murphy put them ahead after two minutes, with a great point from play, Louise Ní Mhuircheartaigh converting a free before capitalising on a mistake from a kick out to lead 1-2 to no score after 7 minutes.

Meath’s reply was swift and emphatic Emma Troy with a goal after ten minutes, either side of points by Stacey Grimes and Vikki Wall had them level by the 11th minute.

Wall and Grimes extended the lead to two with well taken scores, Troy making it a three point margin by the 22nd minute, Kerry remained within arms length for the rest of the half the goal by Troy keeping Meath 1-8 to 1-5 ahead the break, great end to end contest of football in the opening half.

Kerry made it a one point game four minutes into the second half, but it would be as close as they would get in the second half, Emma Duggan made it a two point game once more, before Niamh O’Sullivan reacted to a mistake from a Kerry kickout to rattle the net after 45 minutes, 2-9 to 1-7 in the royals favour.

The netted again shortly after substitute Bridgette Lynch hitting the crossbar before regaining composure to score at the second bite of the cherry, Meath comfortably ahead by eight points with ten left in the second half.

Kerry threw everything including the kitchen sink at Meath in the final exchanges, failing to conjure a score to bring spice back into the contest, Meath’s defence solid in formation able to stop Kerry in their track, Ní Mhuircheartaigh tried to goal late in the half from a free but Monica McGuirk saved well, the hooter sounds on another famous win for the Royals in Croke Park.