SFC: Lally delivers as Meath and Armagh share the spoils 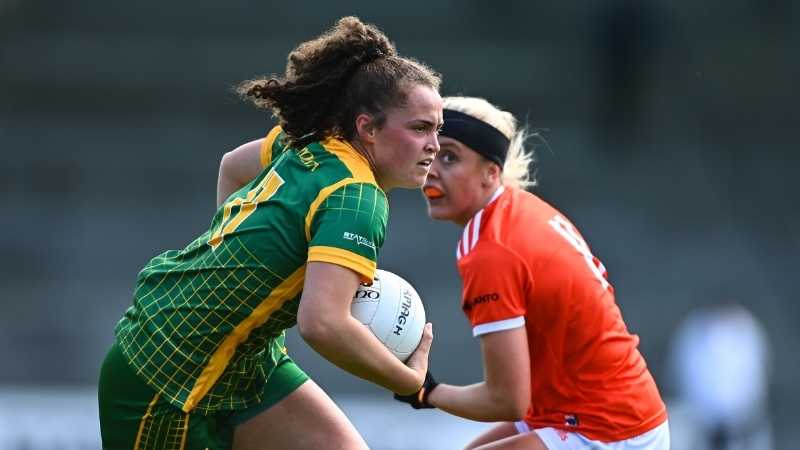 Orlagh Lally salvaged a draw for Meath as the reigning champions advanced to the quarter-finals of the TG4 All-Ireland Senior Championship despite being held to a draw by Armagh.

Lally hit a fine effort in the 54th minute and despite both sides having possession in the final exchanges neither could find a winner at Glennon Brothers Pearse Park.

It was a case of two heavyweights colliding in this Group B Round 2 clash and that’s exactly how it panned out. Armagh will be disappointed they didn’t see the game out; for large periods their defence was resolute and kept the lively Meath forwards very quiet.

Aimee Mackin was in fantastic form in the opening half. She got the first score of the game in the fourth minute when she pointed a free. She then hit a long-range effort and in the eleventh minute fired over her third point. Meath’s first score came from Lally in the 13th minute.

A fine Mackin free restored Armagh’s three-point lead before Aimee Mackin and Kelly Mallon combined, with Meath keeper Monica McGuirk and her defence scrambling to stop Aimee Mackin from finding the back of the net.

The lead was cut to one point in the 26th minute but a neat point from Aimee Mackin just before the break saw Armagh lead 0-6 to 0-4.Both sides were guilty of poor shot selection at the start of the second half. The first score came in the 37th minute when Mallon hit over a free. Two Meath points cut the gap to one in the 39th minute but Armagh replied with fine points from Blaithin Mackin and Niamh Coleman.

As the clock ticked down both teams had time on the ball but couldn’t muster up a winner. The Orchard County were awarded two late frees but decided to play the ball short and it came to nothing.