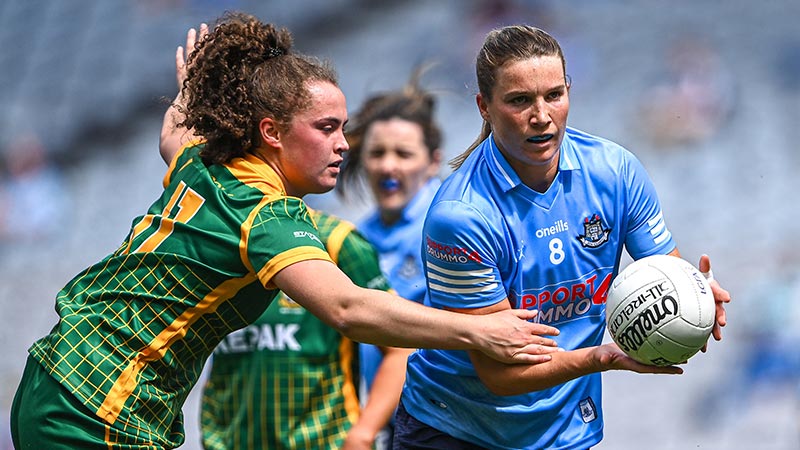 Having found themselves three points adrift at the break, a superb scoring blitz at the start of the second half put the Royal County in a strong position to claim their first provincial crown since 2000. However, Dublin held firm and Tyrrell’s calm finish propelled her side towards a 16th Leinster crown.

After a cagey start, Nicole Owens – a late addition to Dublin’s starting line-up – opened the scoring with a ninth-minute point. Meath’s defensive set-up ensured that clear-cut scoring opportunities were initially at a premium for their opponents, but Eamonn Murray’s team also took a while to settle.

On the other hand, Dublin were growing in confidence and moved four points in front courtesy of a brace from St Sylvester’s ace Kate Sullivan and another courtesy of the ever-influential Lyndsey Davey.

It took Meath all of 29 minutes to get up and running but even though Aoibheann Leahy found the target from close-range, Tyrrell’s first point of the day gave Dublin a commanding 0-5 to 0-1 cushion into the interval.

Yet the game was dramatically turned on its head upon the resumption as Meath registered 1-2 without reply to edge themselves into the ascendancy. Straight from the throw-in, 2021 TG4 Footballer of the Year, Vikki Wall played the ball into her Dunboyne clubmate Emma Duggan for a fine point from play.

Duggan had a subsequent effort that rebounded off the post but midfielder Orlagh Lally was on hand to claim the rebound and fire beyond the reach of Ciara Trant.A routine Stacey Grimes free suddenly presented Meath with a slender advantage in the 36th minute and while Dublin eventually responded with another Tyrrell point, a Wall score at the end of a trademark lung-bursting run kept the Royals ahead inside the final-quarter.

The pendulum swung back in Dublin’s favour on 47 minutes, however, when Tyrrell coolly slotted a penalty past All-Star goalkeeper Monica McGuirk.

Meath’s Maire O’Shaughnessy was sin-binned for a foot block on Owens in the lead-up to this score, but a second free by Grimes left the gap at a bare minimum upon her return. Wall was also yellow carded in a frantic finale, though, and with Niamh Hetherton adding her name to the scoresheet, it was Dublin who prevailed.