Robinson’s second half strike secures win for Boys in Green 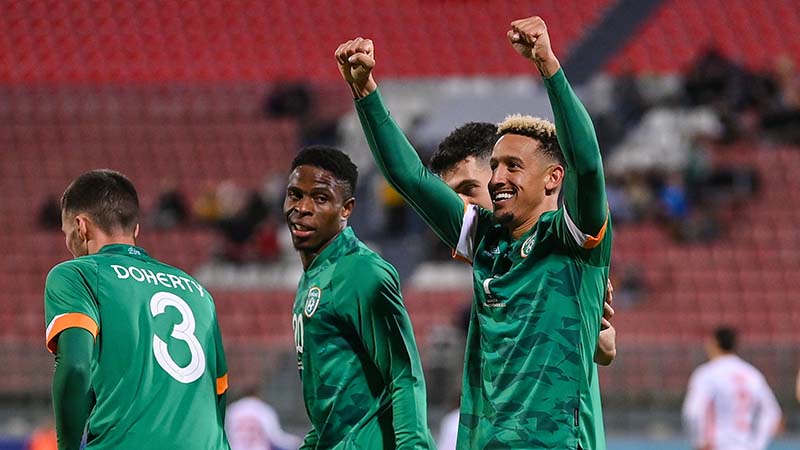 Callum Robinson pounced on a defensive error to give the Republic of Ireland a 1-0 away win against Malta at the Ta’ Qali National Stadium this evening.

Malta defended resolutely throughout the first half as Ireland controlled possession without creating many clear-cut chances. The Boys in Green made an effort to press high and pressurise the hosts.

Despite the domination of the ball, it was the hosts who had the best chance of the first half in the early stages. After 11 minutes, the home side found themselves with a great opportunity to counterattack as they outnumbered the retreating Irish defence 3 to 2.

The ball was sprayed wide to Oxford United striker Jodi Jones whose disappointing effort was easily saved low by Kelleher in the Irish net.

The hosts managed to frustrate the Irish for most of the first half. The defence cleared many crosses and their central midfield three ensured that Ireland couldn’t play through the lines.

Jamie McGrath was perhaps Ireland’s brightest spark of the half and found pockets of space down the left of the Malta box and was unfortunate that his crosses were snuffed out.

Ireland’s best chance of the first half came on the 43rd-minute-mark when McGrath picked out Doherty with a lovely cross to the back post. The Spurs wing-back cleverly nutmegged defender Camenzuli to feed the oncoming Alan Browne.

Despite being right in front of goal, Browne was only capable of a toe-poke on the stretch which sailed wide, much to the relief of Bonello in the Malta goal.

The second half started in much the same vain at the same time as Nathan Collins earned the first booking of the game for a clip of the substitute Dumston Vella. Both teams failed to capitalise on freekicks on the edge of their respective boxes before Ireland were finally gifted an opener.

Coming up to the hour mark, Malta midfielder Matthew Guillaumier woefully undercooked a back pass to his goalkeeper. Callum Robinson was in the right place at the right time and comfortably slotted the ball into an open net.

Malta did try and push higher in search of an equaliser after conceding but a flurry of substitutions from both sides in the final half-hour heavily disrupted the flow of the game. The only significant chance came with just under 5 minutes remaining when substitute Callum O’Dowda rattled the post after an impressive touch and dribble down the left flank.

Much to the delight of the travelling fans, Evan Ferguson was introduced again tonight to make his second international appearance while Belfast-born Mark Sykes made his Republic of Ireland debut when he replaced the goalscorer, Robinson.

While tonight’s game was not the most convincing victory ever for Stephen Kenny’s side they will be pleased they finished their 2022 season with a win ahead of March’s crucial European Championship qualifiers which get underway against France at the Aviva Stadium.