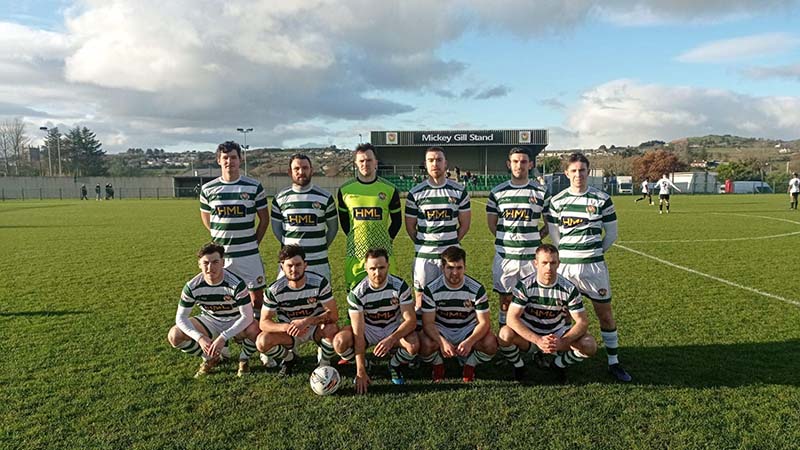 Playing with the breeze, Cockhill started on top forcing a succession of corners but the closest they came to opening the scoring was on 13 minutes when Adam Duffy controlled and swivelled well, but his half volley found the side netting.

Letterkenny settled and had a spell of possession of their own but, on the occasions they breached the Cockhill defence, Harry Doherty was alert and cleared.

Cockhill broke the deadlock on 34 minutes with the move of the match. Stephen Duffy gained possession just inside the Rovers half and released Garbhan Friel on the right. His first time ball across the box was expertly finished by the arriving Adam Duffy.

Letterkenny weren’t fazed and almost equalised just minutes later when O’Brien’s free kick was pushed away by Doherty before forcing Doherty into an even better save, low to his left, two minutes before half time.

The second half was a tense affair with Cockhill content to sit in and be dangerous on the break. Rovers were unable to mount any sustained pressure and the home side reasserted dominance and settled the game in the last ten minutes with two goals.

Adam McLaughlin’s corner was headed in at the far post by Lee McColgan before another fantastic delivery from McLaughlin, this time from a free kick, was glanced home by Oisin McColgan.

It was a night of penalties on Thursday night as Bonagee United opened up a gap at the top of the Ulster Senior League.

When Tiernan McKinney drew Derry, who fell behind to a Tony McNamee penalty in the 75th minute, level, there were 92 minutes on the stopwatch.

And, yet, there was still time for a late, dramatic twist.

Gareth Harkin skipped away from goalkeeper Fintan Doherty – back on the pitch where he cut his teeth as a goalkeeper of note – and went to ground. Referee Barry Maxwell pointed to the spot.

A hush descended on Dry Arch Park, but McNamee was the picture of cool as he stroked home the winner.

Early in the night, John Roulstone, standing in for the unavailable Oisin Cannon, parried well from Tiernan McGinty, the Tory man who recently moved to Derry.

Roulstone denied McGinty from point-blank range in the 26th minute before Michael Funston struck the inside of a post at the other end.

There was a moment of danger for the hosts when McKinney pushed the ball past Roulstone inside the area, but Gareth Breslin, playing his first game of the season following an injury, was back to avert the panic.

Bonagee had big claims for a penalty nine minutes into the second half when McNamee went down under Doherty’s challenge. Maxwell shook the head as Bonagee protested vociferously.

Roulstone intervened with a big save to deny Sean Patton – another of the Donegal men in the Derry line-up – whose deflected effort was turned away.

Funston headed over and there was a sense that, maybe, it just wouldn’t be their night.

Bonagee it the front when McNamee, whose cross had been handled by a Derry defender, fired in from the penalty spot.

Derry appeared to have earned a share of the spoils when McKinney converted after Stephen Black was deemed to have fouled Callum McCay, but McNamee had the last and decisive say.