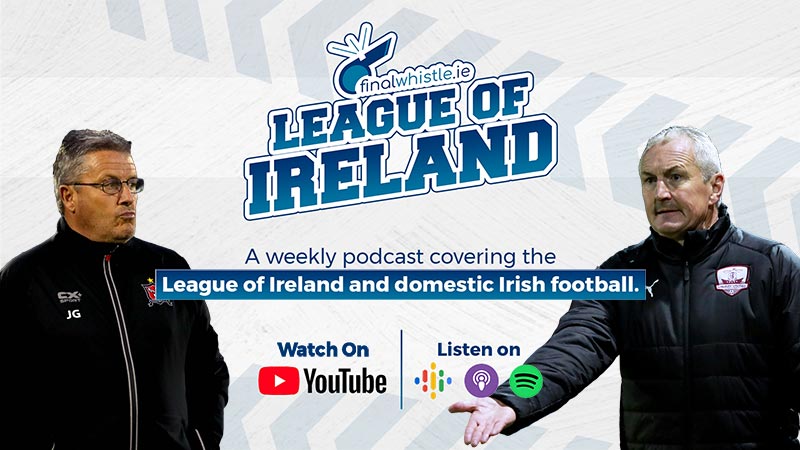 This week Alan Keane & Breifne Earley are joined by league & FAI Cup winning coaches John Gill and John Caulfield. The two experienced campaigners, in opposite dugouts just two short seasons ago at the table topping clash between Dundalk and Cork, speak about the changes in both their own and their then club’s situations in the time since.

First Alan Keane runs through the games played last weekend across both divisions in the SSE Airtricity league including the late cancellation of the Cabinteely clash with Galway United which fell foul of Covid restrictions after a reported Covid 19 positive case in the Dublin side’s camp.

He also discusses the Clash of the Rovers as the game erupted in the last few minutes with Shamrock Rovers forcing a late equaliser after a goalkeeping mistake had handed the Bit O’Red the lead late on.

Former Dundalk coach and manager John Gill (22:34) discusses what he’s been up to since leaving Oriel Park midway through last season. He chats about keeping an active interest in the league and how he has been impressed with Pat’s but that it’s going to be a tough call for any side to finish higher than Rovers.

Gill does a deep dive into his most recent role at Dundalk, the reasons behind his own decision to leave the club and the changes made around the club on and off the pitch.

He details the subtle, but important, differences between his role at Dundalk and the roles of Alan Mathews at Pat’s and Shane Keegan at Dundalk now as well as interactions from outside influences internally within the club and externally via social and mainstream media.

John Caulfield (46:36) talks about how his move to Galway United came about midway through last season and the changes he’s brought to the now full time operation at Eamonn Deacy Park with morning and double sessions the norm in the City of the Tribes.

Caulfield explains the fantastic work being done behind the scenes in Galway and the steps that have been taken by the enthusiastic members of the club’s board to back his ambitious plans to bring success back to United.

He outlines his concerns about the transient nature of the game and the way a few poor results can change the mood around a club and throughout a fan base. He discusses the need for all clubs in the league to attract better quality of sponsors and partners.

That’s a first step to allow players to be paid 52 weeks of the year, with a guarantee of getting their wages each and every week all year around.

Caulfield, who spend his formative years west of the Shannon, splitting his time between Galway and his adopted home of West Cork where his family are based.

Finally Alan and Breifne discuss the weekend’s fixtures (74:00) in both divisions ahead of another busy weekend as well as a quick fire run through the first round of mid week fixtures next week.