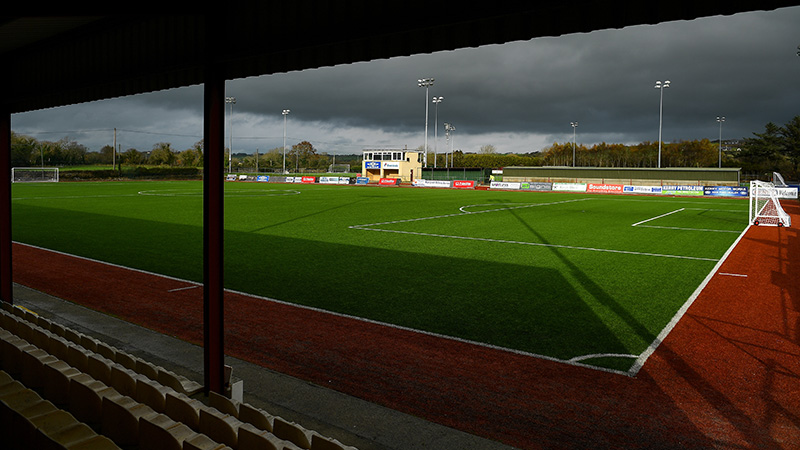 A new era of League of Ireland Soccer begins in the Kingdom, as Kerry FC begin to finalise details ahead of entering the First Division for the 2023 season.

The floodlights are being turned on, the surface examined and catered to and the new seats for the stand are on the way from Spain, Mounthawk Park and Kerry FC are both gearing up for a debut season in the League of Ireland next year.

After a long six month wait, the club was given the green light yesterday, the hard work to get the club in a position to take part in the league paying off, members nervous but the joy of Kerry being able to promote LOI football was clear to see.

Some formalities now need to be completed such as a manager, players and the season itself once fixtures are announced, Galway United, Waterford and Finn Harps just some of the high-profile teams making the trip South next year to face the Kingdom’s selection.

Sporting Director Billy Dennehy is a local of the town of Tralee, growing up close to the home of the Kerry District League Mounthawk Park, like many players in the county he started local with Tralee Dynamos and Kingdom Boys, before moving on to Shelbourne where he would leave to move overseas and join Sunderland, he later returned to the League of Ireland, lining out for such clubs as Derry City, Shamrock Rovers, St Patrick’s Athletic, two stints at Cork City before ending his career at Limerick FC in 2018.

Internationally Dennehy played at U17, U18, U19, U21 and U23 levels for the Republic of Ireland national team, no stranger to the league having won two titles at Shamrock Rovers, he will oversee the role of Sporting Director of the Club, speaking on the news of the licence going through he was overjoyed as to what it will do for players in Kerry.

“I am delighted that we have got it over the line because it was a long journey to get it to this point. It was a venture that for many years was unattainable or too far out of a reach for this area or this county.

But now we have shown through the work rate of the players and their performances over the past number of years and the ability that they have shown at National level at U-17 and U-19 level that the next platform that was required was to allow them play at senior level and thankfully now League of Ireland football is there for the players.”

Now that the licence is there the plan is in place to over the next few months for the T’s to be crossed and the I’s dotted, for who will be named manager of the team and of course the roster of players ahead of the commencement of the 2023 season in February, the club has a structure in place according to Dennehy now the real work gets underway.

“Well, the license was only formally granted on Wednesday but obviously we have been working away in the background believing that this was going to happen. So we are not starting totally cold, but at the same time, there were certain things that we could not complete until we formally got the license. One of those is the appointment of a manager.

The club structure will be formulated from the bottom right through to the top and that will not change. The academies have been in operation for the last five years anyway. Last year was the 14’s, 15’s, 17’s and 19’s under the Kerry District League banner and they will all transfer to Kerry FC and they are all up and running for the past number of weeks and there has been players coming to training in big numbers.”

Kerry FC will be totally amateur according to Dennehy, it had been rumoured of some semi-pro players coming in to join the ranks to help the side compete in the first year, with some bigger budget clubs in that Division, such as Galway and Waterford for example, Dennehy believes it will give players from the region an area to develop their careers for the future.

“We will be totally amateur I said it before when you are planning a model for going down the road of the League of Ireland you have to choose one of two options.

You either go with the option that needs a big budget, with heavy investment in the senior team with maybe having to sacrifice the underage structures or else you take your time and you build slowly and try and produce from within and develop from within and progress from within and that is the model we have chosen.

We know it’s going to be more difficult, we know it’s going to be a longer road and we might not get instant results, Brian and David are not coming in with bars of gold on white horses. No, this will be a long road and at times a difficult road but believe it’s the only way, we will produce our own players from this area and from the region and give them an opportunity to progress and excel and hopefully not just with Kerry FC but eventually to go further afield.

We are going to play against teams in the League of Ireland with huge budgets and resources and it’s going to be hard to compete with fully professional outfits, but we are not going down that route for now, we are starting to take small steps and develop as the years go by.

We will also be looking after the education of these young players through our association with MTU and offering scholarships to the US program that we have. As David will tell you we are also hoping to get some young players from Boston Bohs once we sort out visas so we could have a few boys coming in where we can have a look at them and see if they could they strengthen our squad, so we might have an Irish/Boston connection.”

On the field work has taken place to meet the criteria to get the licence from the FAI, off the field the club will need funding and sponsorship in order to grow and support the club in their inaugural season, General Manager Sean O’Keeffe says that now the licence has been rubber stamped they can start engaging with businesses’ the feeling in the county is one of pride as a new venture for sport in the county develops.

We’ve had lots of very solid inquiries from business and from today we start engaging with those people, there is a very good feel-good factor around this project. The fact it’s Kerry, which is a massive sporting county.

A lot of companies want to come in behind us and we’re looking forward to engaging with them, and I think we’ll give them a good product. The relationship with the business community is something we will be expanding and building on.”

One of the main figure heads behind the project is Brian Ainscough one of the American based directors at the club, with Steven Conway also involved, Ainscough originally hails from Dublin, is a former Irish Youth National Team player and former professional. He is now the CEO of the Boston Bolts but will also have a role with the Kerry Outfit.

Speaking at their press conference at Mounthawk Park, Ainscough who yes is a Dub working in a Kerry Club, which may be sacrilegious to some people, believes the primary mission the club is to help players in the Kingdom Grow.

“From my standpoint exactly, what Billy was talking about there, the mission we want to do is to help, the Kerry community player wise and develop them, that’s our mission and obviously think we’re going to find people, that want to come back into this area.

From clubs that are currently in the League of Ireland, we’re already getting enquiries from players that want to come back and be part of this historic day, first year who wants to be the first manager, who’s going to be the first captain all that stuff.”

In a county where GAA is the crown in the Kingdom, soccer has always been important at local club level, now the transition will be made to attract big crowds into the home of the Kerry District League, with the floodlights beaming on LOI Friday Nights.

Dennehy believes the sport will not be a direct competitor to GAA within the county, having the likes of the Garvey’s Tralee Warriors taking in huge crowds for Basketball games for example shows how passionate the Kerry spectator is about all forms of sport, the thoughts of the county being centred around GAA is a view Dennehy does not believe in.

“It is a question often asked but genuinely I never see it as any sport competing against each other in the county, the GAA has a fantastic history and culture and that will never change.

It should not change because we are all very proud of the GAA and we support Kerry when they are in an All-Ireland Final, we go to the games and we are part of that community too, what were trying to do here is provide a pathway for lads who want to make a career in soccer.”