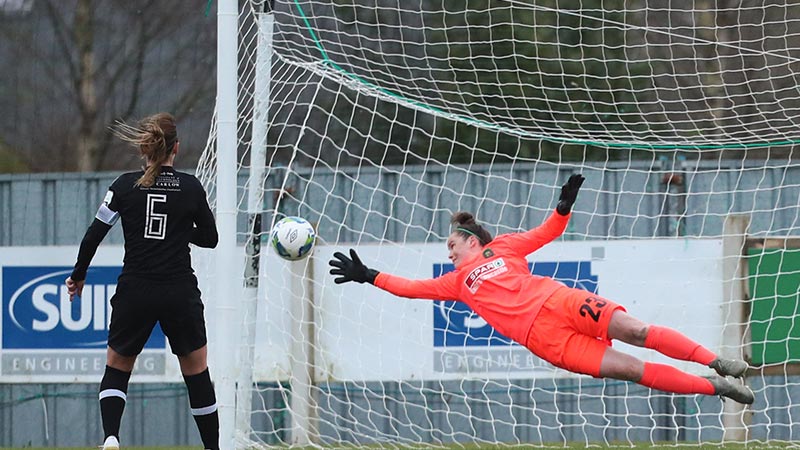 In a battle that really could have gone either way, this game provided chances for both teams to take the spoils and in the end, it was a really terrific strike from Eleanor Ryan-Doyle which proved to be the decider.

In windy conditions at Ferrycarrig Park, both teams started the game strongly. Aine O’Gorman was influential for Peamount down the right hand side, causing Wexford problems. On the opposing side, Aisling Frawley looked very dangerous on the wings and she was denied a goal when through one on one with Reid-Burke.

It really was nip and tuck with very little between both sides. The wind was playing havoc for both teams as many crosses and free-kicks sailed over the crossbar due to the strong wind.

Peamount United had a penalty claim in the twenty-sixth minute as a shot from Smyth-Lynch was deflected out for a corner. It probably would have been very harsh on the defender who was close to her and had little intention to handle it.

In the thirty-sixth minute, Wexford had a really good chance as Murphy played in Rossiter behind the centre-back with a delightfully weighted pass. However, she seemed to be off balance as she struck the ball and it went just wide of the right hand post. Let off for Peamount! Peamount did look dangerous down the left wing with good interplay throughout the game between Beirne and Smith-Lynch.

In the second half, both sides continued to play well. Ten minutes in, Peamount had a really great opportunity. It started on the left wing but they calmly kept possession, working it completely from left to right and Lauryn O’Callaghan set up her team-mate Aine O’Gorman in space but unfortunately for Peamount, she failed to connect. Let off for Wexford!

Lauryn O’Callaghan impressed for Peamount in defence and she was adept at intercepting two dangerous attacks from Wexford. Dearbhaile Byrne, on the left hand side of defence, was similarly defiant, making some really good tackles and passes forward to set up attacks on the left.

Then, with five minutes to go, there were two hugely dramatic moments. Firstly, Wexford winger Frawley dribbled strongly down the right and crossed to team-mate Rossiter who was tripped inside the area. The referee pointed to the spot. Up stepped Kylie Murphy, but unfortunately for Wexford, she missed.

Then, with their next attack, the impressive 65th-minute substitute, Sadhbh Doyle, placed a through ball behind the defence for Eleanor Ryan-Doyle, who curled a magnificent shot from outside the box into the top right hand corner of the goal. 1-0 Peamount, with only four minutes of regular time to play.

Wexford made some attacking substitutions and tried their best for the remaining time but Peamount held on for a crucial victory on the opening day of the Women’s National League.