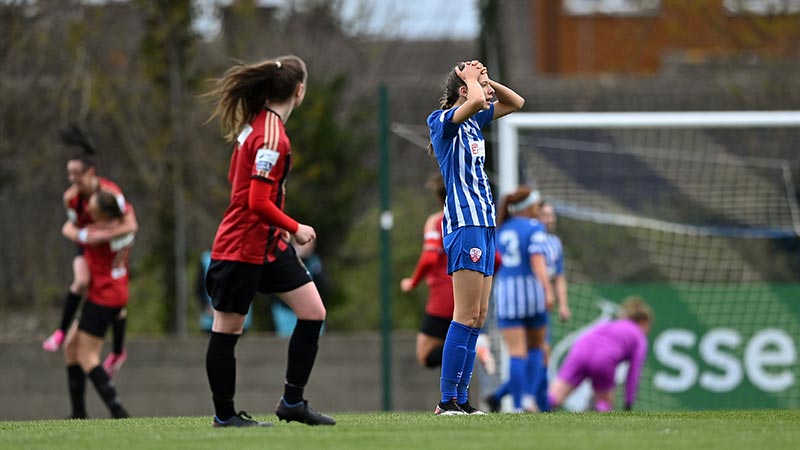 If Bohemians wanted to send out a message of intent on how much they have improved since their debut season yesterday was a telling tale.

In the last game of the season, Bohemians lost it late to Treaty United in a 5-4 loss that left the side much to ponder during the cold winter nights. Yesterday they sent out a message.

Treaty goalkeeper Meabh Ryan was called into action early on when she has had to deal with a series of crosses into her area that could have caused her some trouble if she hadn’t alert to the danger of the advancing Bohemians forward line. The home side didn’t have to wait long to open their scoring account as Bronagh Kane scored two goals in the space of thirty-seven seconds. At present the Guinness World Record for two goals by the same player at a World Cup was sixty-nine seconds, Kane nearly cut that record in half.

The first goal came when an under-hit pass to Meabh Ryan to her centre back Eve O’Sullivan was latched on by Kane who tapped it into an empty net as Ryan was out of position. The second goal some seconds later came straight from the kick-off as Bohemians continued to push forward from the restart and Naima Chemaou calmly passed it to the right-wing where Kane slotted it past Ryan from range for her second.

Bohemians added a third midway through the first half as Cheamaou went from provider to scorer as she struck an excellent volley inside the area past Ryan to add a third. There would be two more goals in the half with Bohemians adding a fourth before Treaty pulled one back for the visitors. A free-kick sent into the area by Cheamaou was met by captain Sophie Watters who took the ball down on her right and switched to her left foot with a low drive past Ryan.

Treaty did pull one back just before half time when Aoife Cronin did excellently to finish at the back post following a cross from the right, despite attention from the Bohemians defence the striker opened her WNL account for the season with a good finish.

The second half saw a renewed vigour from Treaty United as Aoife Cronin began to test Niamh Coombes in the Bohemians goal, he hit the post early on before her teammate Shannon Parbat got a second goal for the Limerick side after a corner sent into the area was initially headed down, the ball fell to Parbat at the near post where she was tapped in from close range.

Bohemians took control of the game once more and substitute Aoife Robinson got on the goal-scoring act with a brace of goals. Her first was when the ball fell to Robinson on the edge of the area after she initially won the ball and she did brilliantly to chip the keeper from the edge of the area. Meabh Ryan was caught off her line and Robinson ensured to excuse the chip with finesse to restore her sides three-goal lead. She added another goal late on when she headed home from close range at the back post to finish off an excellent team move.

The goal sees Bohemains top of the table after week one, they will travel to Galway next week who let a three-goal lead slip to Cork City while Treaty is on the road again as they face Athlone town.