Wexford hold Peamount to a draw 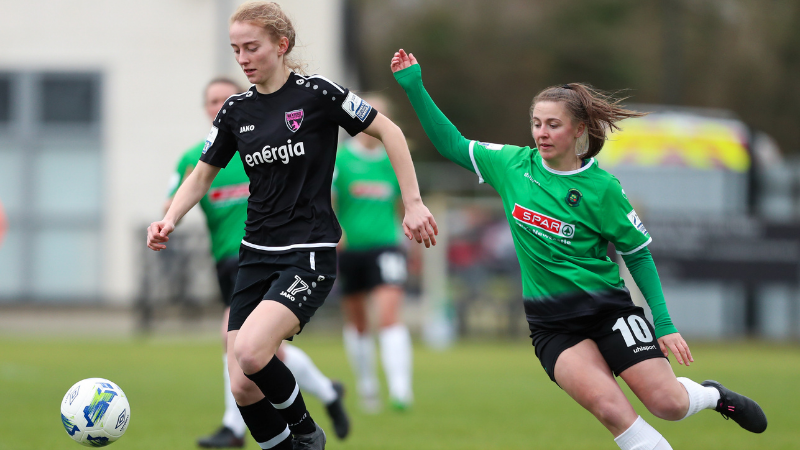 Wexford Youths’ and Peamount United’s 1-1 draw means the only ones to come away from the game with a win at Ferrycarrig Park are Shelbourne.

Alannah McEvoy’s fifth minute strike was cancelled out by Aoibheann Clancy’s spot kick in the 33rd to send the sides into the break at 1-1 and although the second half saw chances pop up to fruition none of them were to prove decisive on the day.

When table toppers Peamount come to contact with their old arch rivals Wexford the fixture always promises to be a physical battle, and that of course you could credit this game tonight with.

Despite only one yellow card having been awarded throughout the match (Karen Duggan) the visceral reaction the players clearly embodied due to the far reaching importance of the result was no doubt heavily on display.

It took only five minutes for the deadlock to be shattered when McEvoy capitalized on some sloppy defensive slip ups to tap in the opener.

Set pieces were the aim of the day for the home side, looking to utilise them on every opportunity their addition to the scorecard came from the penalty spot.

Synonymous with tenacious fancy footwork, Clancy remained cool, calm and collected to slot away the ball out of reach of Niamh Reid Burke for the equaliser.

While prospects were a plenty throughout the residue of the occasion their conversion and transfer to the scoreline were not so ample.

A share of the spoils - the prize divvied to each of the teams upon the final whistle; the impact is made even more monumental when put in stark contrast to that of the reigning champions’ next clash.

The Reds collected a routine 3-1 victory over Cork City during the day, in essence putting them in the driving seat of the league and in poll position for the significant excursion to come now on Saturday the 11th of September in Greenogue.