Waterford advance to the playoff final 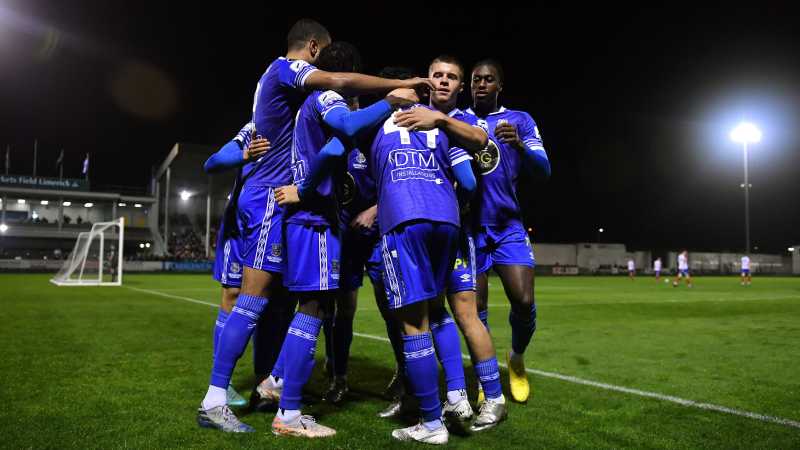 Waterford tied 3-3 with Treaty United in a chaotic encounter that saw three penalties awarded at the RSC to secure progression to a play-off final this evening.

The Blues held a three-goal advantage coming into this second leg of a play-off semi-final but found themselves just a single goal ahead on aggregate at half-time.

A Marc Ludden penalty just about beat Paul Martin to give Treaty the lead early on but Waterford struck back through Tunmise Sobowale on 22 minutes.

Another Ludden penalty put United back ahead soon after and the fullback assisted Lee Devitt moments later to see the visitors take a two-goal lead into the interval.

Waterford emerged reenergised after the restart and struck within minutes through a Wassim Aouachria penalty.

Talisman Phoenix Patterson curled a magical effort in at the far post on 55 minutes to see the Blues back level and ahead 7-4 on aggregate.

With several changes to the team, Treaty struck first in what would be a chaotic and open first half when Ludden snuck his penalty past Martin after he was brought down by Sobowale in the area on 9 minutes.

Waterford hit back in the 22nd minute after a well-worked break saw Aouachria play in Sobowale to strike the top-right corner, the fullback redeeming his earlier mishap.

Moments later Sobowale prevented Treaty from taking back the lead when he headed off the line.

Parity would last for less than three minutes for the Blues, however. Richard Taylor brought down the troublesome Success Edogun to give away a second penalty for Ludden to convert on 25 minutes.

The impressive Ludden then played a part in a third goal, crossing from the left for Lee Devitt to slide on to and take Treaty two goals ahead, just one behind on aggregate.

The hosts came close to getting a second just before the break when Phoenix Patterson bent one of his trademark free-kicks over the Treaty wall at goal only for Jack Brady to make an excellent save.

Waterford got off to an ideal start after the interval, winning a penalty on 47 minutes after Sean Guerins was deemed to have fouled Shane Griffin.

Aouachria stepped up to claim his 11th goal of the season with a cool finish past Brady.

Patterson's 55th-minute strike secured the ex-Spurs winger a 24th goal across all competitions and ensured his side would stay in contention for promotion to the top flight.