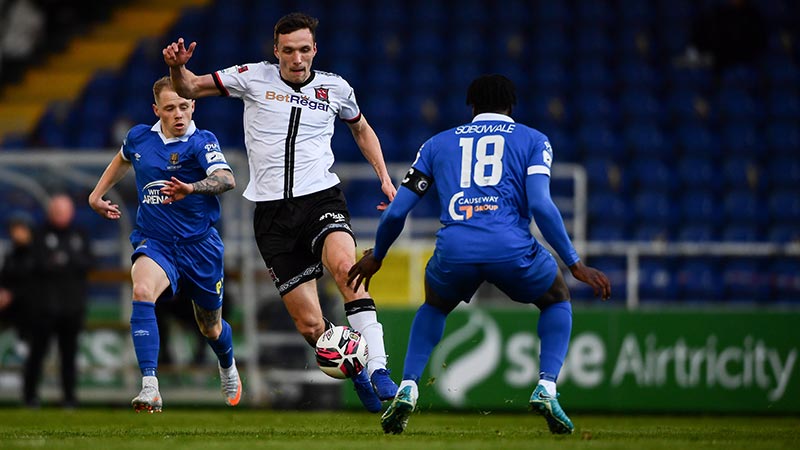 Dundalk put in a five star display, as a dominant performance from the away side swept aside a Waterford outfit that has shown the true potential of the Louth men.

Andy Boyle and Chris Shields opened their respective league accounts with a goal apiece in the first half, before Michael Duffy added a third; with a fantastic curling effort not 20 seconds into the closing period.

Waterford, who could only name three players on their subs bench were down to the bare bones as Kevin Sheedy’s side were held to just chances that on another night would have been converted.

The best of those efforts fell to John Martin only for the post to deny the striker.

Dundalk exerted their dominance and pace of play from early on and it seemed at one stage the Lilywhites would be queuing up for chances all night. David McMillan and Michael Duffy both had opportunities early on but they failed to convert with Paul Martin keeping the goal intact in the opening exchanges.

The visitors made the breakthrough when Andy Boyle scored his tenth league goal, as he rose highest from a Duffy free-kick to head it past Martin.

Waterford had an excellent chance to equalise, as Adam O’Reilly slid in to try and convert a John Martin cross but the ball evaded him at the opportune time.

Duffy had a fantastic opportunity to add a second latching onto a Cameron Dummigan cross on the volley but it was well saved by Martin.

Dundalk was awarded a penalty as Prince Mutswuguma took down Junior in the area and the referee pointed to the spot. Chris Shields despatched the penalty, and in doing so scored his first league goal since his winner against Cork in 2018.

The Lilywhites got off to the perfect start to the second half as Duffy scored inside the first 20 seconds as he broke down the right and curled an excellent effort into the top right corner.

Waterford’s best chance came shortly after Dundalk’s third goal as An excellent chance fell to John Martin as he teed an excellent shot only for the post to deny him. Both sides continued to press for chances as the Blues went close again courtesy of John Martin who struck the post once again and Junior struck the side netting.

The games don’t get easy for Waterford as they face Shamrock Rovers next and for Dundalk, it's another away day as they head to the midlands to face newly promoted Longford.