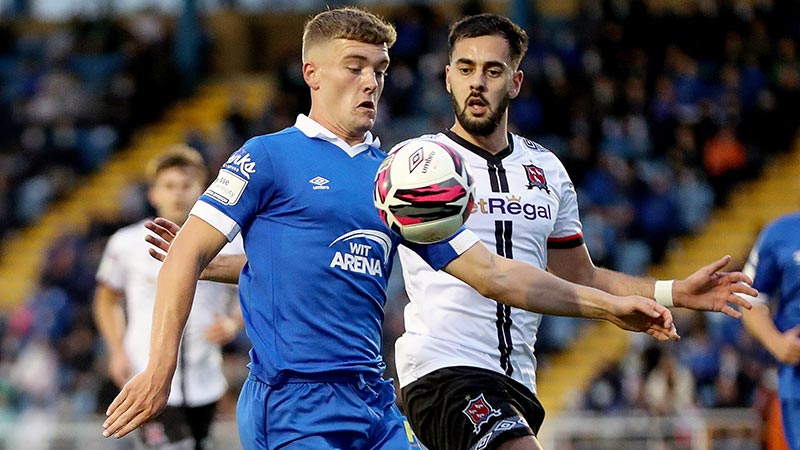 Anthony Wordsworth's returns from a four-game suspension was the second half difference as Waterford earned a draw against Dundalk in the RSC.

It looked as if Sean Murray’s early goal would be enough for the away team to take all three points but a much improved second half from the Blues saw them get their just rewards as Wordsworth equalised to punished an ill-disciplined Dundalk side.

The visitors got off to the perfect start as a free-kick quickly taken was sent into the path of Daniel Kelly, the wingers initial shot on goal was blocked down by Sean Murray was on hand to tap the loose ball home from close range. The rest of the half was a case of a series of half-chances that neither side failed to capitalise on.

Waterford's best opportunity came when an excellent ball was crossed to Jack Stafford at the back post but he could not get his effort on target. Patrick Hoban laid the ball off to Sam Stanton and he let one fly from 20-yards, but Brian Murphy in the Deise goal gathered on the second attempt.

On half time an opportunity for an equaliser fell the hosts way, when a dangerous free-kick was sent into the area and with Dundalk failing to clear their defensive line, the Blues had numerous attempts to test Alessio Abibi but failed to do so.

The game nearly went over boiling point early in the second half as Dan Cleary fouled Phoenix Patterson and he was booked but so was Niall O’Keefe and Patrick Hoban in the resulting melee however the game calmed down very quickly. Dundalk had a chance to double their tally with a cross from Will Patching into the area was met by Ben Amar whose header was brilliantly saved by Murphy.

Waterford got their just rewards for their increased pressure on the Lilywhites as a free-kick sent into the Dundalk area saw Wordsworth diving down low getting the slightest of touches to it as it trickled past Abibi into the net. Waterford continued to press but to no avail as both sides had to settle for a point but both will feel they had chances to win it.

The result still leaves Dundalk one point behind Waterford as pressure continues to mount on their league table position and performance as they go to Longford next week.