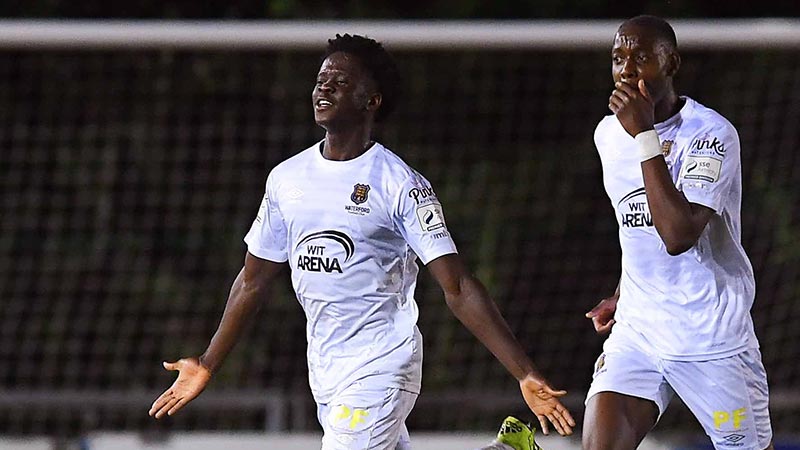 Prince Mutswunguma’s 91st minute winner meant First Division side UCD were controversially knocked out of the FAI Cup after their 3-2 loss to Waterford.

The two sides went into the dressing room level after Colm Whelan’s opener was cancelled out by Armando Junior Quitirna’s strike.

Liam Kerrigan put the hosts back in front but Phoenix Patterson set up a grandstand finish.

Mutswunguma’s winner was in controversial circumstances after referee Robert Hennessey waved away a certain free kick at the other end in the build up to the goal.

Roared on by their boisterous support, the second-tier side started the better and went close through Whelan’s effort.

He then made no mistake firing the ball into the bottom corner from the edge of the penalty area, to give the hosts a deserved lead.

A fiery encounter was emphasised by four yellow cards inside the opening 25 minutes, with eight yellows shown in total.

The visitors responded well to going behind and mounted pressure on the UCD goal, with Greg Halford and John Martin going close.

Quitirna put the Premier Division side level after Jack Keaney was dispossessed and the African striker was cool and composed in front of goal.

Against the run of play, the hosts went back in front through an excellent counterattack that finished with Morgan playing in the impressive Kerrigan, who slotted the ball brilliantly past Brian Murphy.

Mutswunguma won his side a penalty as he was tripped in the box by the clumsy legs of UCD defender Sam Todd.

Patterson sent the goalkeeper the wrong way and put the ball into the corner of the net.

Murphy denied Whelan putting UCD in front for a third time as he somehow managed to deny the striker from close range.

The students were dealt a great chance to go back in front when Jeremie Milambo committed a clumsy challenge on Kerrigan in the area.

But Whelan’s soft penalty was saved by the heroic Murphy.

Tempers flared as UCD manager Andy Meyler was sent to the stands for his strong protests that his side were denied a certain free kick in the build-up to the winning goal.