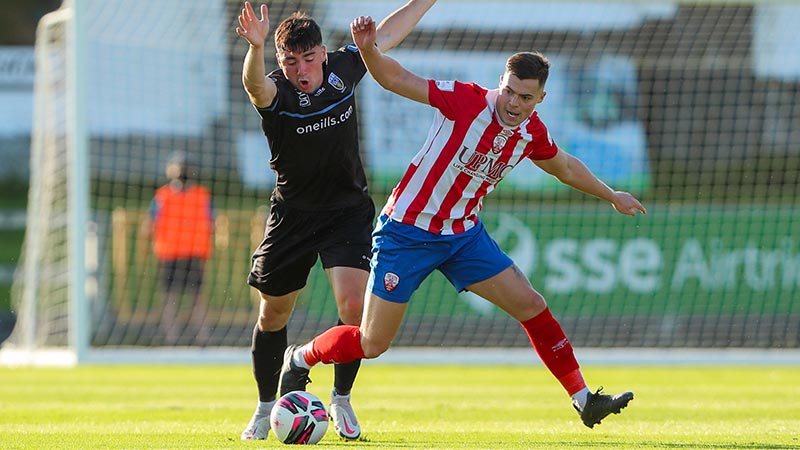 Treaty United stormed into action in this game in Markets Field in the MidWest, as they beat UCD tonight.

Jack Lynch deftly headed into the net to kickstart their victory. A controversial penalty decision allowed UCD to get back into contention, before Treaty scored again through Lynch to cement their lead in the match. Ryan and Lynch were the focal points in this crucial victory.

Ryan was impressive for Treaty, he played the role of sweeper keeper well throughout the game, clearing up a lot of the long balls played forward, making two good saves in each half. His communication with his defence was very good throughout.

Treaty United dominated the opening stages of this game. They took control of the game early, winning two quick corners, one of which had to be cleared off the line by Evan Osam. Treaty were rapidly pressurising UCD, and Sam Todd was lucky not to concede a penalty as he tackled Hanlon who was dribbling at pace towards goal.

Treaty scored first just before the half hour mark after a  great pass from Ludden into the box was perfectly met by Jack Lynch who deftly headed into the net. The game became more heated in the middle of the first half, as Todd, McNamara and Hanlon all picked up yellow cards in a ten-minute period.

A controversial penalty decision allowed UCD to level this game in the 54th minute. However, Treaty United scored again within three minutes through the impressive Jack Lynch to cement their lead in the game. UCD tried hard and played some nice moves but could not break down a stubborn Treaty defensive action.

Lynch was the hero for Treaty United scoring in both halves to get them ahead; with Colm Whelan scoring a penalty in between for the Students.

The Shannonsiders showed great determination and a clinical defensive performance to nullify any UCD attack, and the students will be disappointed not to have created more chances.

This result means that Treaty are now joint second in the league table, 11 points behind leaders Shelbourne and they travel to Athlone next weekend, while UCD will know they will have to raise their performance levels if they are to challenge for promotion in the second half of the season.