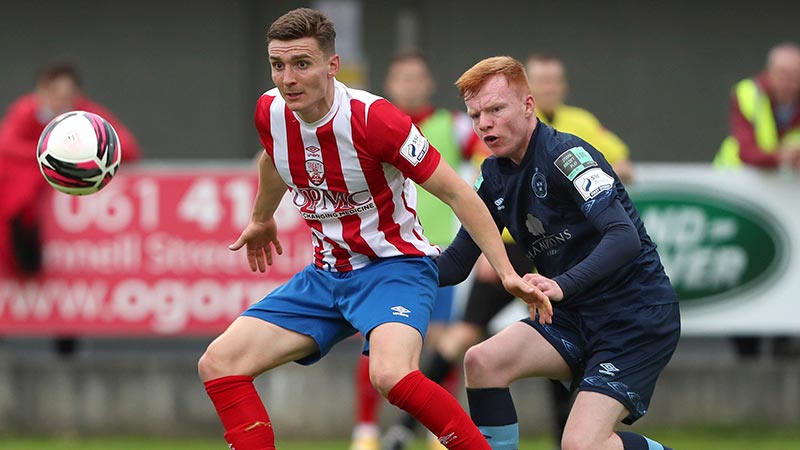 Treaty United dug deep as a dramatic stoppage time screamer by substitute William Armshaw ensured they got a share of the spoils with Shelbourne on a 1-1 score-line at Markets Field.

Shelbourne thought they had moved further away from Treaty after Michael O’Connor finished sweetly after 67 minutes to put the visitors deservedly in front.

The hosts wouldn't lie down however and after consecutive late corners which involved goalkeeper Tadgh Ryan’s presence in the box, a ball broke to Armshaw who smashed it into the top left to unleash euphoric celebrations in Limerick.

Treaty arrived with their usual steel and order in defence. Even when Shels were by far the better side in the first half they never really troubled Ryan in the home goal. Treaty’s defensive work and the Reds’ high possession made it a scrappy and dull opening 45 minutes.

Tommy Barrett’s men turned the tide a bit when the game resumed. They started to get more of the ball and begun to box in the Dubliners with high pressing. However during this the visitors still looked capable of scoring and knowing the quality they had up top with the likes of O’Connor and Ryan Brennan, an opportunity felt inevitable.

In the 67th minute O’Connor snatched on a loose ball on the edge of the area and placed it in the bottom left corner past a helpless Ryan to leave the visitors one up.

As soon as they got on the front foot the message from Ian Morris was maintain it. Barrett made a couple of bold substitutions and went for the leveller even taking off top scorer Kieran Hanlon before the hour.

Treaty kept fighting and swung numerous hopeful balls into the box in the late moments of the game meanwhile the league leaders just tried to clear the ball and use game management see out another three points.

Just when it looked like it wasn’t going to happen for Treaty they got a concession of corners and even Ryan came up from his own box. Eventually a ball broke to substitute Armshaw and he struck wonderfully into to the top left corner to level the game in its dying embers.