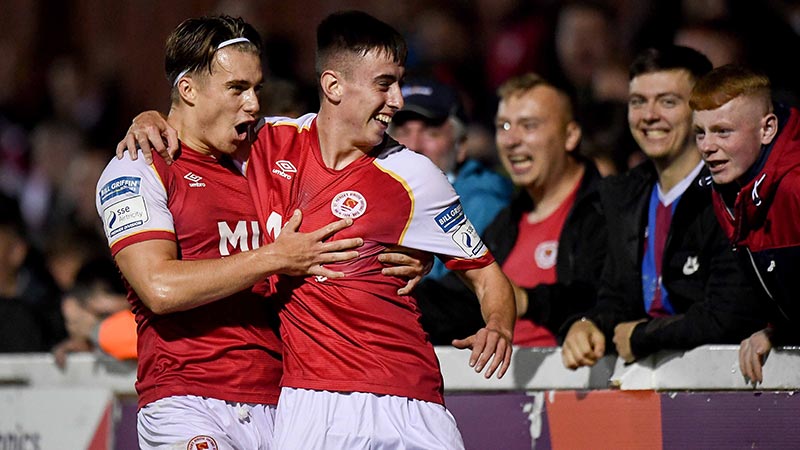 Three goals saw St Patrick's Athletic ease past Wexford FC on a 3-0 score-line at Richmond Park and into the FAI Cup semi-finals, despite being reduced to ten men for most of the game.

Although Sam Bone was shown his marching orders early on, Pat's always looked the better team, and a goal from Burns in each half, and a late Ronan Coughlan penalty; saw the home side past a toothless looking Wexford.

The visitors had their biggest attacking threat, Conor Crowley; sent off in the latter stages of the first half and created very little chances for the rest of the game despite enjoying more possession in the second period.

Pat's dominated play early in the first half while Wexford were content to sit back in a defensive unit, relying on a long ball to Jack Moylan up front as their attacking outlet.

This strategy proved successful  quickly for the visitors when keeper Jimmy Corcoran found Moylan alone with Pat's defender Sam Bone. The attacker looked to be away when Bone lunged in and stopped him in what was deemed a red card offence, leaving the home side down to 10 men with close to 83 minutes yet to play.

St. Pat's were not deterred however and continued to look the more confident side, controlling possession while Wexford offered little in an attacking sense.

Conor Crowley dragged Wexford's best chance wide soon after the sending off while Paddy Barrett came close at the other end as the Saints continued to press the visitors.

Billy King posed a constant threat to Wexford with his attacking runs and when he and Chris Forrester joined forces on the right wing they found Darragh Burns in enough space to fire home the games opener, putting the hosts up 1-0 in the 33rd minute.

Things soon became fiery afterwards with Wexford appearing frustrated to have conceded with a numerical advantage and Paul Fox was yellow carded for a coming together in the middle of the field while Conor Crowley, who had been the visitors foremost attacker, received a second yellow for a sliding challenge to see both sides enter half-time with ten men.

With less players on the field the game opened up in the second half and both sides looked evenly matched as each countered  the other's attacks.

Harry Groome had two good opportunities to bring Wexford back to even terms, but it was the home side that scored next.

Darragh Burns brought his tally on the night to two after Chris Forrester supplied a fantastic ball to the Saints attacker.
Though Wexford continued to press the home side, the fight appeared to be drained from the visitors upon conceding a second and St Pat's controlled most of proceedings from then on.

A 94th minute penalty won by the ever running Chris Forrester was put away by substitute Ronan Coughlan to see Pat's three to the good and into the FAI Cup semi-finals, much to the delight of the home support.