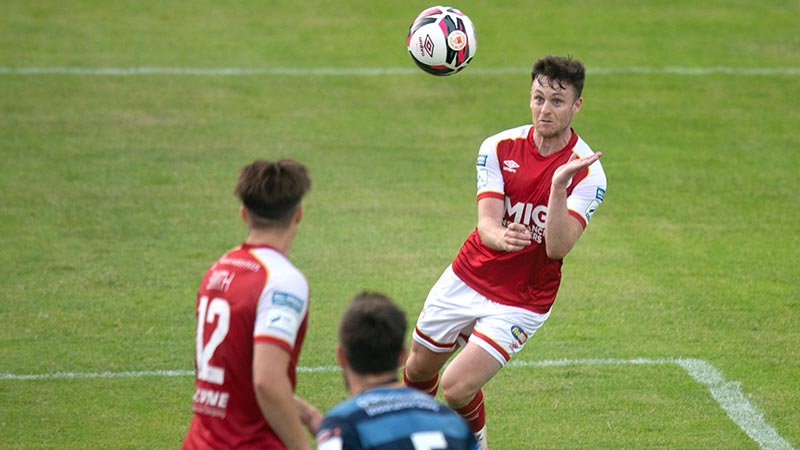 A dominant and controlling performance from St. Patrick’s Athletic saw them come away 6-0 winners over Bray Wanderers at Richmond Park tonight.

This impressive victory sees The Saints progress into the second round of the FAI Cup which already improves on last season’s cup campaign when they were knocked out in the first round.

It was Billy King who got the home side’s first goal of the night after he cut in from the left and let fly. The shot looked to be a simple one for Brian Maher who let it slip past him.

Pat’s seemed to be in control of the game after taking the lead and the difference in divisions soon became clear to see as they got their second.

Jason McClelland was found at the back post by a KIng cross in the 38th minute. The winger made no mistake and dispatched with a diving header.

Going into half-time Bray looked to be struggling and this did not change as the second period started.

The Saints got their third ten minutes into the second period. Ian Bermingham found Ben McCormack in the box and he powered the header home.

Three minutes later Sam Bone made it 4-0. A clearance fell kindly for the defender and he connected sweetly on the half volley finding the bottom left corner via the post.

The fifth goal was arguably the best of the night. Centre-back, Paddy Barrett found himself high up the pitch and got a lucky deflection which gave him some space. He set himself and finessed the ball into the top right corner giving Maher no chance.

The final goal saw King get his second of the night. He came in from the right wing shifting the ball onto his left foot and placing it into the far corner.

A great performance from St Pat’s whose fans and management will be delighted. The victory was made even sweeter with three debutants coming on in Kian Corbally, Josh Keeley and Tommy Lonergan.

Bray will be disappointed to see their cup run end before it really got going but they will be looking to bounce back in the league.