Sligo Denied at the Death 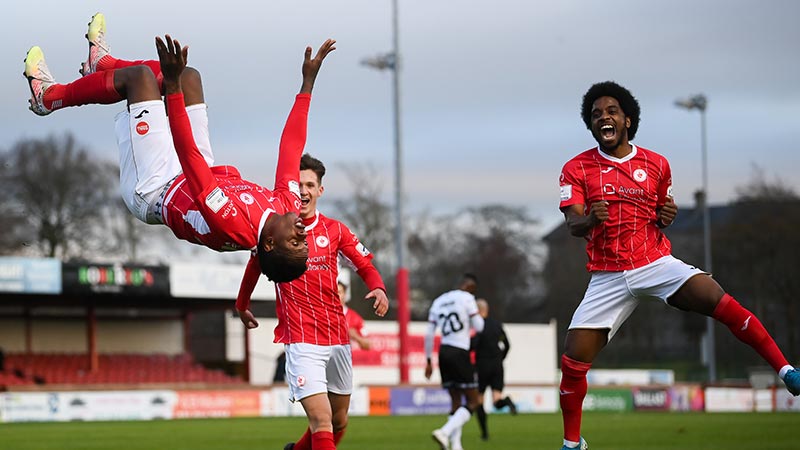 As far opening games of the season go this game had everything, chances aplenty, denials by the post and a late goal ruled out for offside. Sligo’s encounter with Dundalk saw the away side taking home a precious point while Sligo will rue chances they cultivated from a dominant second-half display.

The opening period was disjointed in its delivery with passes askew and tackles flying in with Greg Bolger and Chris Shields renewing acquaintances in their long associated battles of the pairing.

Dundalk was gifted an opening goal when a mix up in communication between Bolger and his goalkeeper Ed McGinty as they tried to play the ball out of the backline saw Greg Sloggett force pressure on the midfielder.

Sloggett forced an error from Bolger to steal the ball and with McGinty completely out of position he squared it to McEleney who curled the ball past McGinty to open his scoring account for Dundalk for the year. It marks a goal on the anniversary of his League of Ireland debut eleven years ago.

Sligo responded perfectly when Romeo Parkes got off the mark for the season with a trademark goal. A free-kick was sent into the direction of the striker and he headed it powerfully past Abibi in the Dundalk goal. While it’s not taking anything away from Parkes’ effort conceding a goal at the near post it’s not something that Dundalk usually do.

Sligo continued to dominate possession and chances and Jordon Gibson was denied by the butt of the post to give his side the lead. After a great phase of play that saw Parkes’ unleash Gibson on the right, his effort beat the onrushing Abibi and it looked as if it was going to nestle in the net, there was a collective sigh of relief from the Dundalk defenders as the post came to the rescue.

Patrick Hoban on another night could have had a hat-trick but on this occasion, it was a case of missed chances and just plain rotten luck that denied the striker. On the stroke of half time, McGinty once again out of place lost possession to his former teammate Junior, the winger sensing the opportunity better taken by his teammate squared it to Hoban whose effort flashed just wide. Looking up to the sky Hoban had the look of ‘It’s going to be one of those nights’

The second half saw Dundalk look to implement a strong start with Cameron Dummingan flashing his effort wide and Greg Sloggett testing the steady hands of McGinty before Hoban headed wide at the near post from a McEleney corner. Sligo continued to push forward but also to no avail but the best chance for Dundalk would fall midway through the half.

Daniel Cleary sent in a deft ball from the right, it had no pace to it, so Hoban had to add direction and power to his header, it looped over McGinty and it looked certain to be going in only for the post to deny the striker. Hoban has scored harder opportunities in his career and his reaction to this latest miss was telling.

One will expect a big season from him that will ignite soon.

In the dying embers of the game, Sligo could have snatched a deserved victory when Mark Byrne sent in an excellent ball that Dundalk failed to clear and Johnny Kenny the seventeen-year-old with the goal at his mercy could not make the right connection. Byrne would go from provider to almost scorer as David Cawley squared the ball into the player only for the ball to nestle in the net but the lineman to deny any kind of celebration.

Greg Bolger had a chance blocked by Abibi at the death but both sides will rue missed chances as Sligo are on the road to Waterford next week and Dundalk entertain Finn Harps at Oriel Park.

Three points a must for both clubs.