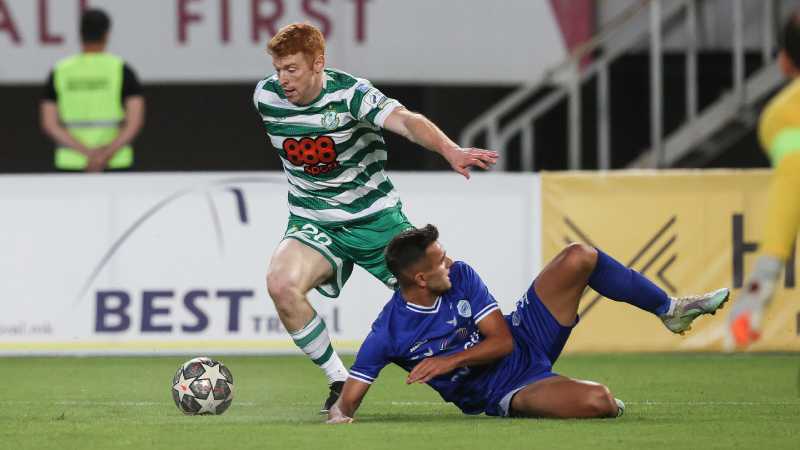 Shamrock Rovers will have European Group Stage action to look forward to this season, as they secured an important win over Shkupi in Macedonia this evening.

A meeting with Hungarian side Ferencvárosi is now on the cards to see who makes the Group Stage phase, while the Conference League route is now guaranteed.

Rory Gaffney looked to be the hero with 65 minutes elapsed in the second half, but a late strike by Aidomo Emakhu helped them secure the victory.

The opening half was a lot more compact than the first leg in Tallaght but Rovers again looked dangerous in attack, Rory Gaffney had the first major chance after just three minutes, but the effort was dealt with in the end.

Richie Towell was thwarted twice in the opening half as he searched for a goal, Kristijan Naumovski made a fine save to deny him in the sixth minute, the hosts did have chances but Alan Mannus had little to do with Queven the man looking most likely to score.

It was hard to tell who would score first, Aaron Greene tried his luck from range but the effort went wayward of the goals, Faustin Senghor tried to cause trouble in the Rovers area but he failed to register a shot on target.

While Towell was denied earlier in the half his second chance should have conjured up a goal, but for heroic defending by Faustin Senghor blocking the shot on the way to goal, he needed Naumovski to make a great save to deny Gaffney from the rebound, all action in the opening half but it was scoreless at the interval.

Shkupi again came close early in the second half, Pepi Gjorgiev with the best chance from close range but Mannus was equal to the effort. The Rovers shot-stopper again had a quality night in between the posts.

Graham Burke came on for Towell after 62 minutes, his impact was felt minutes later playing a perfect through ball for Gaffney to chase, he looped an effort from outside the box aided by a deflection it flew over the stranded goalkeeper and into the net.

The goal seemed to take the sting out of the rest of the half, the hosts struggled to make Mannus worried in the Rovers' goal, they came close but failed to reduce the deficit, five minutes from time it was 2-0, Aidomo Emakhu raced through to connect with a long Dylan Watts through ball, the keeper missed the ball to clear and it gave the youngster an empty net to slot home.

Sunday Adetunji scored in injury time for a late consolation goal, but not enough to knock Rovers on a famous European night for the Hoops.