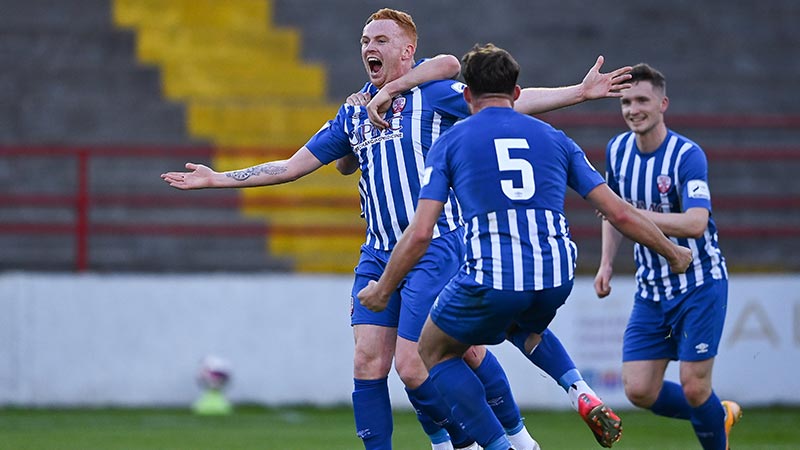 There was plenty of late drama as three goals and a red card in injury time, was enough for Treaty United and Shelbourne to share the spoils at Tolka Park.

The visitors had taken the lead in the 37 minute thanks to Kieran Hanlon. The home side created chance after chance throughout the second half but lacked the quality to make them count.

But two quick fire goals in injury time from substitutes Ryan Brennan and Yousef Mahdy after Hanlon was dismissed looked to have secured the home side an unlikely draw.

However, there was still time Clyde O’Connell to pounce to grab the most unlikely of draws for the Munster men.

Both sides will have mixed feelings about how they feel about this game when they look back on it.

Although Shels controlled the ball for long periods, they often lacked the quality, especially in the final third, to convert their possession into goal scoring chances.

Whenever the hosts created an opportunity, they lacked the composure to make it count. Notably so when Mickey O’Connor's could only aim his point-blank header at Tadhg Ryan and Brian McManus free headed effort looped harmlessly over the bar from close range.

Treaty United, for their part, dominated the first half and took a deserved lead into the break after Kieran Hanlon's goal after 37 minutes. They looked happy to be without the ball for long spells of the second period and defended resolutely, easily thwarting consecutive Shelbourne attacks.

As the clock ticked towards the 90th minute, the tie looked to be put to bed, but in reality, the drama was only beginning.

Mickey Brennan squared a header which his namesake Ryan tapped in to draw the Dublin side level.

Shortly after, Treaty were reduced to 10 men after O'Donnell was dismissed for a second bookable offence, and with the visitors in disarray, Mahdy latched onto a volley to give The Reds an unlikely lead.

But there was still time for one last roll of the dice from the Limerick outfit. They won a corner, and with two extra minutes over injury time played past the allotted 90, Clyde O' Connell struck to round off a dramatic evening in Drumcondra.