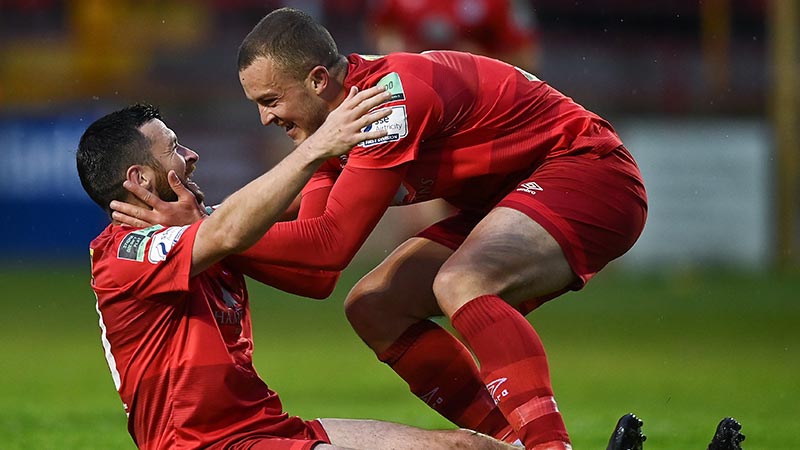 Strikes from Michael O’Connor and Ryan Brennan prove to be the difference in a hard fought 2-1 win for Shelbourne over Cork City at Tolka Park in the League Of Ireland First Division tonight.

In a feisty affair, Michael O’Connor’s first half strike was cancelled out by Cian Murphy early on in the second period before a Ryan Brennan strike secured all three points for Ian Morris’ men. Shelbourne now sit 11 points clear at the top of the second flight.

Both sides started the game off well, with the great atmosphere clearly helping Shels out from the start. The two teams had chances throughout the first half but struggled to find that killer pass in the final third. George Poynton whipped an excellent ball into the Cork City box which found the on rushing Michael O’Connor who headed home from close range to put Shels’ in front with 10 minutes remaining in the first half.  The goal lifted both the hosts players and fans and the Reds nearly went further ahead on the stroke of half time but McNulty made a fantastic stop to deny Ryan Brennan. Shels led 1-0 going into the break.

Shelbourne started the better of the two sides after the interval with Luke Byrne hitting the post and the crossbar denying Ally Gilchrist from close range to save Cork City. The Rebel Army then broke on the counter attack and Cian Murphy fired home into the bottom corner to equalize for Cork against the run of play.

This goal silenced Shels’ fans around Tolka Park. That was until Cork City captain Gearóid Morrissey was dispossessed inside his own half by Mikey O’Connor who sent Ryan Brennan through on goal. Brennan made no mistake and bagged his 10th of the season to give Shels the lead once again.

Shelbourne sat back and invited pressure after the goal giving City the majority of possession for the final half hour. As full time approached, Colin Healy’s men kept the intensity high and in stoppage time Cian Coleman hit a rocket towards the Shels’ goal only to be denied by a brilliant stop from goalkeeper Brendan Clarke.

This was as close as it came for The Rebel Army as Shelbourne increased their lead at the top of the League Of Ireland First Division.