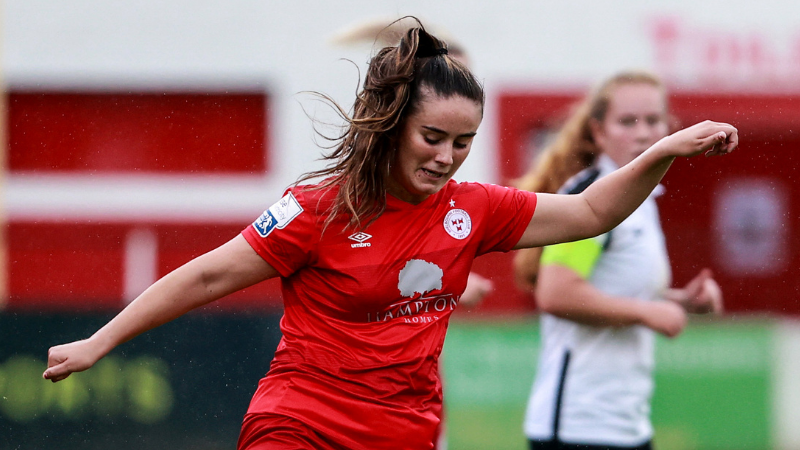 Noel King’s Shelbourne went top of the league as they saw off relegation threatened Athlone Town 4-0 at Tolka Park.

First half goals from Emily Whelan and Alex Kavanagh put the Shels in a commanding position, before Leah Doyle and Saoirse Noonan extended the home sides lead in the second half.

The Dublin based side are two points clear of title rivals Peamount United, who have a game in hand on them after their Champions League involvement this weekend.

It was far from a vintage performance from Shels who will have to play much better when they face their title rivals in the coming weeks.

Conditions were very poor as torrential rain came down during the second half which really effected the quality of the contest.

Shelbourne dominated the game from the off and took the lead after 15 minutes through Emily Whelan’s seventh goal of the season.

The striker had an audacious effort from 30 yards out tipped by goalkeeper Abbiegayle Ronayne into her own net.

Ciara Grant went through one on one and rounded Ronayne but the keeper impeded the attacker for a penalty.

Noonan stepped up but missed the penalty as her spot kick failed to find the corner and Ronayne saved.

Just two minutes later, Shelbourne had another penalty after Jamie Finn was brought down by a clumsy challenge from Kayleigh Shine.

Alex Kavanagh stepped up to take it this time and placed the ball right in the corner to give the home side a deserved two-goal advantage.

Shelbourne sealed the win midway through the second half as Finn’s through ball picked out Doyle whose delicate touch caught out substitute keeper Coombes to make it 3-0.

The home side won a third penalty as Coombes’ mistimed slide tackle brought down Noonan.

The clubs leading goal scorer’s second penalty of the day was again missed as this time Coombes guessed the right way.

But just a minute later, Noonan got on the scoresheet to make up for her penalty misses with a cool finish from close range after being picked out by a good ball by Shauna Fox.