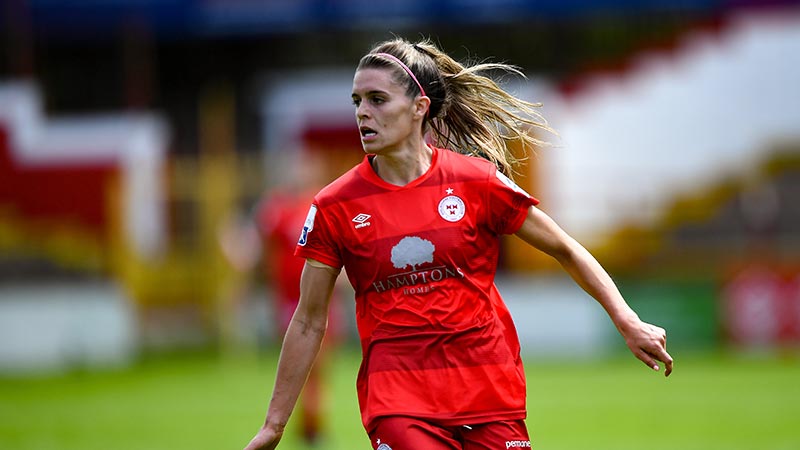 Shelbourne scored five to see off Athlone at Tolka Park this afternoon in the SSE Airtricity Women’s National League.

Jamie Finn’s strike into an open goal in the tenth minute got Shels underway in a tie which they were totally dominant.

The home side failed to score again in the first but goals from Ciara Grant, Saoirse Noonan, Rebecca Cooke and Abbie Larkin in the second half ensured the home side strolled to an easy win over a lacklustre Athlone.

Shelbourne were in control from the outset, dominating possession while pressing Athlone high to force turnovers.

The pressure soon told when they forced a mistake from the Athlone defence and goalkeeper Ria McPhilbin had to leave her goal to gather, but passed to Shels’ Jamie Finn. Finn only had eyes for the empty Athlone goal and hit from outside the box to score the game’s opener.

Shelbourne continued to torment Athlone for the rest of the half but failed to score again. Runs from Jessica Ziu on the right flank proved particularly threatening to the Midlander’s defence but missed chances meant Athlone went into the break just a single goal down.

The second half played out much like the first only that Shelbourne were this time able to capitalise on the chances they created.

An excellent double save from McPhilbin in the 53rd minute denied Saoirse Noonan and then Jessica Ziu before Mia Dodd’s rebound was cleared off the line by an Athlone defender but constant pressure by Shels soon showed on the scoresheet.

A superb pass from Noelle Murray played in Ciara Grant to strike the ball into the right corner of the Athlone net for Shels to double their lead in the 62nd.

With the game decided, Shelbourne made several substitutes who went on to increase their lead. Rebecca Cooke scored in the 87th on her return from the USA while Abbie Larkin got Shel’s fifth and final goal in the 90th minute on her debut.

Katelyn Keogh and Rosin Molloy were the better performers for Athlone but the side created very little even when Shels keeper Amanda Budden was replaced by Sophie Lenehan for the second half, the visitors were often totally out of the game for long spells.