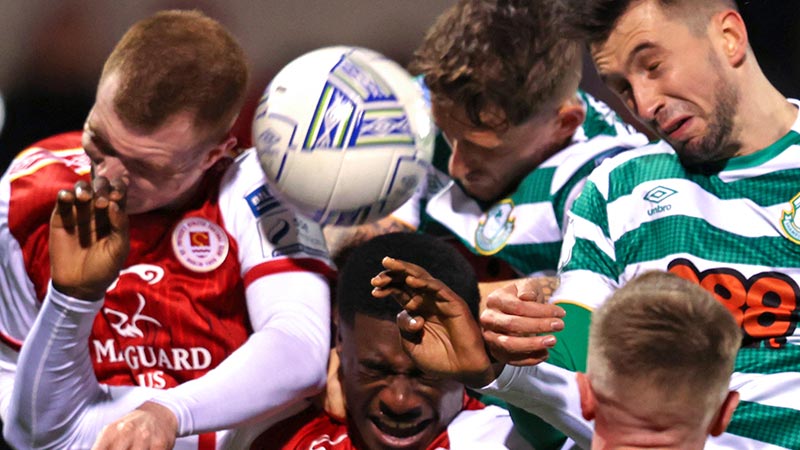 Shamrock Rovers beat St Patrick’s Athletic to win the 2022 President’s Cup on penalties after both sides couldn’t be separated after 90 minutes.

Jack Byrne scored the decisive penalty to seal the first piece of Silverware for Stephen Bradley’s side this season.

It was a tight first period between two teams that were eager to play fast flowing football.

The first chance of the game through Mark Doyle. The Saints debutant picked up the ball inside the Shamrock Rovers half before hitting a timid shot at Alan Mannus who saved comfortably.

It was Doyle again that was involved just minutes later. Sean Hoare’s attempted back pass went straight into the path of fellow Pats’ new boy Eoin Doyle. Doyle squared the ball to Mark Doyle who was waiting on the penalty spot. Sadly for Tim Clancy’s side, Doyle hit a fresh air shot and pressure was relieved for Shamrock Rovers.

Shamrock Rovers continued to dominate possession but struggled to find that killer pass inside the Pats’ final third. The League Champions had their veteran goalkeeper to thank again just after the half hour mark. Eoin Doyle found space inside the Rovers’ half and ran through one on one with Alan Mannus. The Hoops’ shot stopper was equal to Doyle’s effort and tipped the ball around the posts for a corner.

Mannus was called into action just moments later and made a fantastic point blank save from Billy King’s header to keep his side in the affair.

The sides went in level at the break after neither were able to make the breakthrough.

Pats got their second period off to a flying start when Jamie Lennon’s half volley was saved by Alan Mannus but Eoin Doyle was ready to pounce on the six yard line to give the FAI Cup champions the advantage.

Rovers maintained pressure on the visitors, and it was some great play from wing back Neil Farrugia which got his side back into the game. Farrugia skipped past Jack Scott before hitting a low cross into the area. Anang came to catch the cross but spilled the ball into the path of Rovers’ skipper Ronan Finn who equalised for Stephen Bradley’s side.

After both sides failed to find a winner, a penalty shootout was needed to decide the President’s Cup. After the two teams netted their opening three penalties, Saints captain Chris Forrester stepped up, but Alan Mannus guessed the right way to give the Tallaght outfit the lead.

Jack Byrne had the penultimate spot kick and made no mistake from twelve yards to seal the win for Shamrock Rovers on his return to the League of Ireland.