Advantage Rovers at the halfway mark of Europa League tie 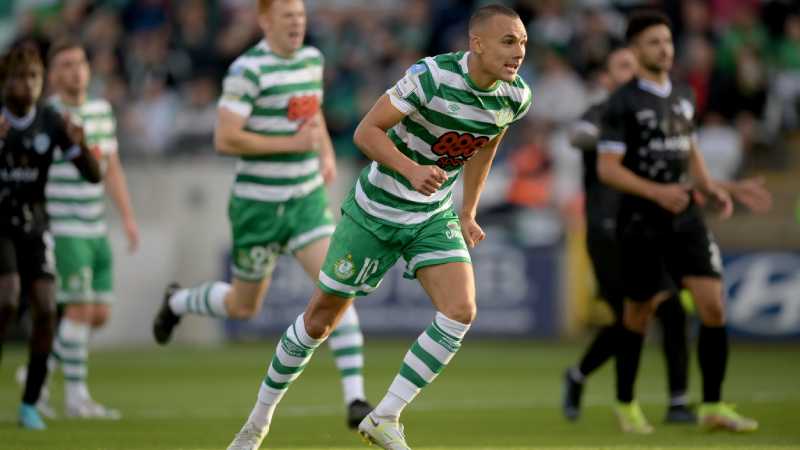 Shamrock Rovers are a step closer to group stage European football, after getting the optimum result in Tallaght this evening against Shkupi.

Two goals in the opening half had their heads up, plenty to build on as they controlled the majority of the contest, despite conceding and having the momentum change they remained composed to see out the tie.

Shkupi came close numerous times but Alan Mannus was on hand to make a string of fine saves, plenty still to play for in the second leg but the ball well and truly in Rovers' court.

Rovers controlled the tempo well early in the first half, Chris McCann dissected the Shkupi backline with a lovely pass the danger was cleared however, Rory Gaffney meanwhile failed to make up his mind whether to shoot or pass to Graham Burke he failed with both as the chance failed to materialise.

With 12 minutes elapsed Rovers hit the breakthrough, Andy Lyons hacked down inside the area without question from the referee to point to the spot, Burke stepped up and dispatched to the bottom right corner, Kristijan Numovski guessed right but failed to keep it out.

Burke had another chance to double their lead minutes later but the effort hit his own man and went wide, they hit the second minutes later and it was a thing of beauty, Alan Mannus sent the ball up the field, Burke passed to Gaffney out wide his cross set up Dylan Watts, his strike like a striker more than a midfielder.

Mannus had little to do in the opening half but needed to be alert late in the half to keep the score at 2-0, Angelche Timovski coming close for the visitors with Freddy Alvarez also stinging the palms of Mannus with the final attempt of the half.

The visitors had plenty of chances early in the second half, Sunday Adetunji coming close a fingertip save seeing his header go over the bar, while Queven had a thunderbolt from range saved with a sensational stop by the Northern Irish keeper.

Gary O’Neill went for the audacious on 55 minutes, a long-range shot that flew wide of the mark, Watts came close after the hour mark but failed to beat the keeper for the second time, all action at the other end however as Mannus was in sensational form all night.

The Macedonians had their goal after 77 m minutes, Queven with a thunderbolt from range to elude Mannus and hit the top corner of the net, certainly a momentum shift but just minutes later Walid Hamidi was shown a second yellow as the wind was blown from their sails, just as they looked to leave a goal down, O’Neill picked his spot and curled a beauty from outside the area in the top corner, sublime.