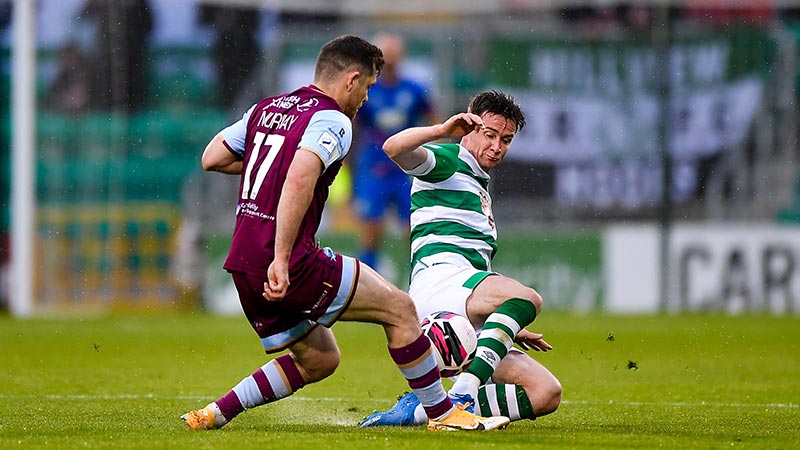 Drogheda grabbed a precious 1-1 draw on their travels to Shamrock Rovers tonight as 1,000 fans watched on from Tallaght Stadium. After Waterford held St.Pats to a point, Stephen Bradley’s Hoops will feel disappointed to miss a great chance to regain top spot.

Two controversial penalties in each half decided the result. Dane Massey fouled Sean Gannon in the 18th minute and Graham Burke converted to give the home side the lead. When Darragh Markey drove at the rovers box in the 63rd minute he was fouled, and Chris Lyons tucked it away to equalise for Drogheda.

Despite a flat second half from Rovers after dominating the first, Rory Gaffney was incredibly unlucky on multiple occasions late in the game. Tim Clancy’s men showed heart and defensive discipline though to hold on and it finished all square in Dublin.

Aside from a late flurry of pressure by the hosts, it really was a game of two halves. It began in a somewhat scrappy fashion, but once Rovers found their rhythm they took control and Drogheda looked spineless.

With the visitors’ narrow midfield, Aaron Greene got bags of joy out wide and Burke was causing issues in the pockets by picking it up deep. They led comfortably at the break through his spot kick after Gannon was clipped.

Clancy must have said something right at the break, as his side faced the threat of three straight defeats at the time. The boys in claret and blue came out a new outfit, and when Clancy brought on the in-form Lyons and Mark Doyle, it felt an equaliser was inevitable.

The well-deserved leveller came just beyond the hour when Lyons calmly scored his penalty for his eighth of the season. It didn’t take long however for the Hoops’ attacking talent to look dangerous again.

Gaffney much like in the Bohs game was very unfortunate not to score. The best of his attempts being a lovely flick off the post in the 88th minute. Bradley interestingly made no substitutions even with Dylan Watts back on the bench, perhaps proving costly.

That extra freshness might have been too much for Drogheda who were able to hold out a great result in Tallaght and reward the travelling fans.