Omoijuanfo strikes at the death to seal Norwegian win 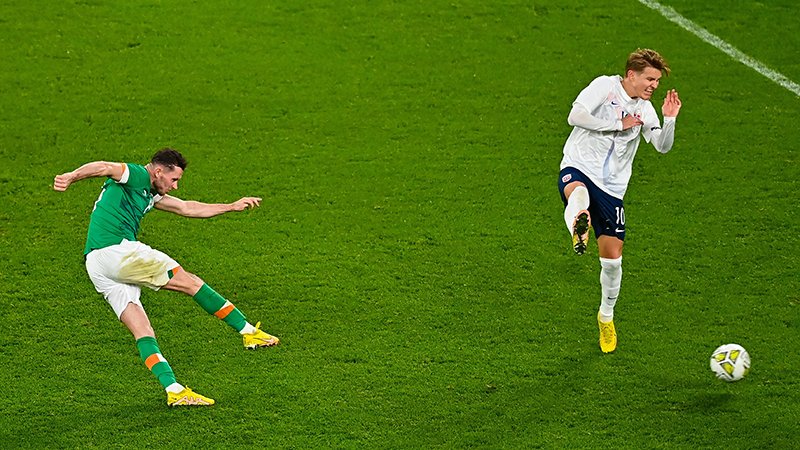 A late goal by Ohi Omoijuanfo saw Norway defeat the Republic of Ireland 2-1 at the Aviva Stadium in Dublin tonight.

Martin Odegaard crossed to Leo Ostigard who caught John Egan off guard and headed home just before the break to give the away side the lead.

A much better second half from the hosts was rewarded though as Alan Browne equalised with 20 minutes to go.

Norway pounced late however, substitute Omoijuanfo was at the end of a breaking ball off another Odegaard free kick to smash past Gavin Bazunu.

This was ultimately a disappointing result for the Republic of Ireland who felt they should’ve come out with at least a draw in this game but failure to deal with set pieces was what cost them in the end.

Ireland dominated the ball in the opening ten minutes of the match but there was not much by way of chances with Callum Robinson and Mohamed Elyounoussi both shooting from range but no trouble to either keeper. Kenny’s side looked to play down the left to Callum O’Dowda who was hugging the touchline from the off and finding some joy in gaining possession.

Jorgen Stand Larsen’s right-footed shot grazed the top of the bar on the 25th minute mark after sloppy Ireland play saw an unforced turnover giving Odegaard time and space to pick out the Celta Vigo striker. The away side's first chance of the match.

Coming into the half hour mark Ireland had 64% of the ball but the vast majority in the middle third as they had one touch in the Norwegian box, with their opponents starting to press them backwards and come into the game.

Just before half time Norway took the lead. A freekick from Odegaard was not dealt with by the Irish defence which fell to Elyounoussi who saw his shot blocked out for a corner. The Arsenal captain Odegaard found his target this time however as Leo Ostigard rose highest to head home giving the away side a lead going into the break, the first shot on target of the game. A first ever International goal for the Napoli defender.

Ireland started the second half brightly. Some much needed momentum was gained after Robinson crossed to Egan who unfortunately did not know much about it as the shot trickled past the post.

The crowd came to life with them for the first time and the players fed off this. Alan Browne had Ireland’s first and second shot on target, a close range shot saved well by Örjan Nyland and a header caught comfortably shortly after.

Just before the hour mark Bazunu was forced into his first big save of the game, some great linkup play from Norway saw Odegaard get in behind the defence and the Arsenal man was frustrated he couldn't find the far corner.

Ireland were rewarded for an excellent second half just before the 70 minute mark. Alan Browne picked up the ball 20 yards out off a Norwegian defensive header and obeyed the chants of shoot from the Lansdowne Road end, striking beautifully off his right foot past Nyland into the bottom corner.

Ogbene and Brady were introduced shortly afterwards as the Irish looked to get a late winner. Callum Robinson who looked lively coming in off the left in the second half had an effort saved by Nyland which he should’ve done better with.

The majority of the 41120 crowd were disappointed with just five to go as Norway struck what would prove to be a late winner. Another deep free kick from Odegaard was not dealt with well by the back line, a regular occurrence on the night. with substitute Ohi Omoijuanfo smashing the bouncing loose ball past Bazunu.

One positive to take away for Ireland was seeing the introduction of Brighton striker Evan Ferguson to the senior fold for the first time who replaced Browne with just a few minutes to go.