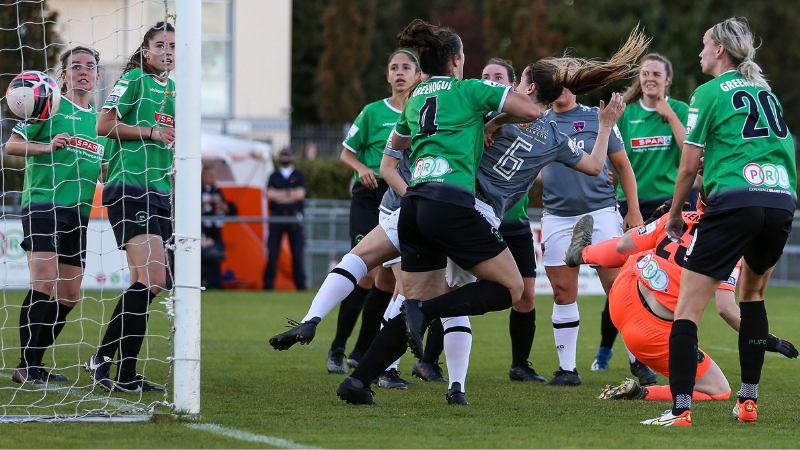 Both captains netted in a thrilling encounter between Wexford Youths and Peamount United this afternoon, some Kylie Murphy magic manoeuvring the away side into the Evoke.ie FAI Cup final after extra time.

Substitute Lynn Marie Grant supplementing the skipper’s brace, they eclipsed the WNL leaders 3-1 and will now face Shelbourne to decide the ultimate winners on November 21st.

Always anticipated to be a tight affair, the stalemate was only broken 10 minutes before the interval. Youths having caused havoc in the box located Murphy who stitched the ball into the back of the net at the end of a Ciara Rossiter corner.

Throughout the rest of the game Dearbhaile Beirne proved a massive asset to the Girls In Green nipping a lot of Wexford’s exploits in the bud, while Della Doherty excelled against her former club and Teegan Lynch created chaos in midfield.

80 minutes in tensions rose beyond doubt with all of Peas’s effort exploited in going forward. While Lauren Kelly, Alannah McEvoy and Stephanie Roche all came close, they were all to no avail.

Just when it looked as if they were home and hosed Aine O’Gorman put away the equaliser in the 1 minute after regulation time to prolong the game.

Two 10 minute halves were to follow and the action only intensified from there.

Wexford then came back with vigor, Murphy scoring her second in the 91st with

Grant capping things off in the 98th.

Nicola Sinnott’s yellow card for an impeachment on McEvoy who was clean through may be disputed after the proceedings, but it was time that was United’s biggest enemy in the second half.

Ellen Molloy could have added insult to injury in the closing seconds when Niamh Ried Burke came off her line to suffocate another avenue attack, but the ball veered just inches wide.

Seeing as Galway were handed a narrow defeat by The Reds earlier in the day, it’s to be a different cup winner than league victor this year which will be decided by second and third place runners of the WNL.