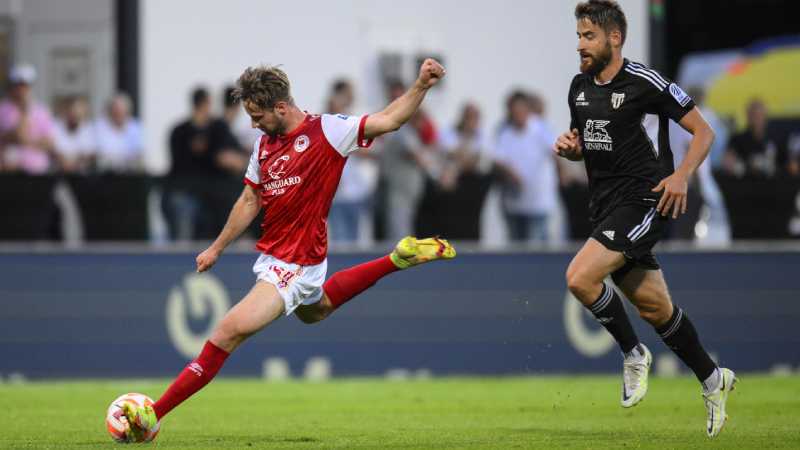 St. Patrick’s Athletic produced heroics as they advanced to the Europa Conference League Third Qualifying Round. With the game ending 0-0, extra time couldn’t separate the sides. Joe Anang saved a penalty and was immense. It went to sudden death and Tio Cipot blasted the ball over the bar and Pat’s could celebrate.

Both sides had chances including a penalty claim that was waved away for Mura in the 21st minute when Daku was fouled in the box. He was also lucky not to be sent off for simulation in the second half.

Dardan Shabanhaxhaj curled his shot just wide in the 18th minute while three minutes later Pat’s were fortunate not to give away a penalty when Harry Brockbank brought down Mirlind Daku.

In the 25th minute, Barry Cotter squandered a great chance to put Pat’s ahead but he headed over from close range. Down the other end, Daku brought a fine save out of Joe Anang.

As the game went on it opened up more. Just before the half-hour mark, Adam O’Reilly hit a good strike but it went wide.

In the 38th minute, Daku got into a good position but hit the post with his shot. Pat’s started the second half very well. Forrester blasted over the bar and minutes later Klemen Pucko got a great header in to put the ball out for a corner with Cotter threatening.

Billy King had a great chance in the 51st minute; Forrester played a lovely ball into him and King cut inside but his shot across the face of the goal just went inches wide in the 56th minute Daku was lucky not to be sent off. The forward went down in the box under the challenge of Brockbank. He had already been booked but the referee didn’t take any action.

Mura were reduced to 10 men in the 71st minute when Matic Marusko was sent off for an off-the-ball incident with Forrester. It appeared the Pat’s player struck out at the Mura sub. He had only been on the pitch eight minutes.

Joe Redmond with a great block on Daku’s shot in stoppage time. Anang brought off a great save at the start of extra-time as the home side tried to break the deadlock. The Pat’s keeper pulled off a superb save to deny Klepic minutes later.

In the 101st minute, Serge Atakayi squandered a great opportunity; he decided to take the shot himself and it went just wide with Eoin Doyle in a great position. It went to penalties and the rest they say is history.