Trio on target for Saints in Longford 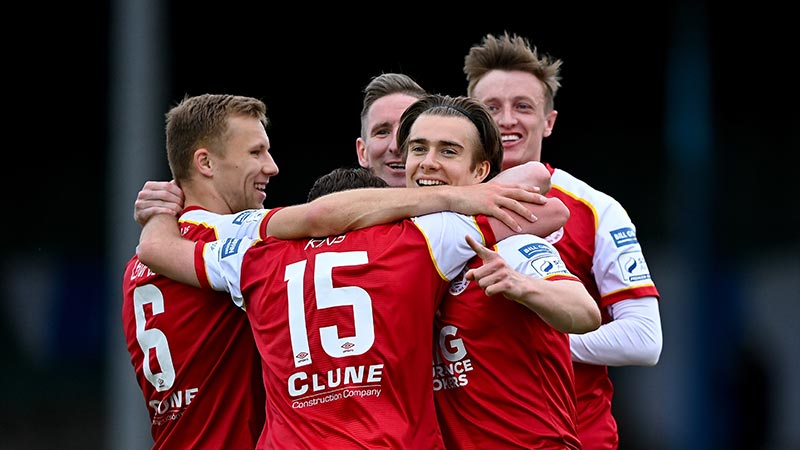 St. Pat’s started the second half of the SSE Airtricity Premier Division in the best possible fashion, by beating Longford 3-1 at Bishopsgate, thanks to Robbie Benson, Matty Smith, and Ronan Coughlan goals.

Aaron Dobbs set the equaliser early in the second-half before Smith and Coughlan confirm all three points for the away side.

This was a disappointing result for the Town and their fans who returned to the stands after more than a year, as they are now anchored to the very bottom of the league after Waterford’s win over Dundalk.

A refreshing return for the Saints by confirming a five-point win; while they took all three points out of the game, they come closer to Shamrock Rovers who split the spoils with Finn Harps.

The visitors dominated the first half entirely, completely suffocating the Town by keeping the ball and moving it around with pace.

Paddy Barrett brought two early attempts, both denied by Lee Steacy as he pushed the nil-nil until the late stages of the first 45 minutes.

A good build-up from the Saints ended up with Alfie Lewis trying his luck, sending a dangerous curveball slightly off the post.

Steacy had to fly once again in the 11th minute to stop a powerful Chris Forrester shot from a freekick.

Pat’s kept stretching the field as much as possible looking to capitalise early in the game. On the other side, Longford never found a way to stop the opponent’s several options to attack Steacy’s goal.

Ultimately, Pat’s changed the score before the break; as Robbie Benson headed in John Mountney’s cross coming in from a corner, putting justice in the score.

However, the equaliser didn’t change the run of the play, as the visitors kept coming with solid opportunities.

The 53rd minute saw Coughlan and Forrester share a clear chance to put Pat’s back in the lead inside of the box; Longford denied it throwing bodies to keep the ball away from the goal.

Shortly after, another individual mistake put the Dubliners back in front; as Matty Smith scored from a rebound resulting from Forrester's first shot blocked by Steacy.

The negative score brought Longford up forward looking for one of their strongest weapons in 2021, a late goal, the check-mate came in the 81st minute.

An amazing job by the substitute Darragh in the right-wing found Ronan Coughlan inside the box as he headed home with a nice finish.

The final whistle confirmed Pat’s win with one of their best performances of the season.