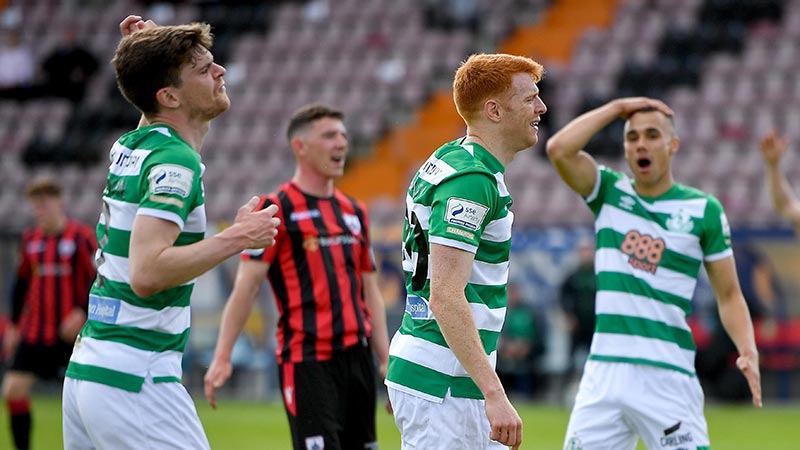 Shamrock Rovers ended their losing run with a dramatic 95th minute winner this afternoon at Bishopsgate.

Rory Gaffney had the ball in the net after half an hour, but his goal was ruled out for a handball.

Graham Burke missed what looked like an easy finish in the second-half, which looked to be an important miss after Longford had frustrated the Hoops.

They kept plugging away though, and Gaffney powered home with one of the final kicks of the game to break the tenacious Town resistance.

If you were looking to have an afternoon nap, the first half of this game would have been the perfect opportunity to catch some shuteye. Neither side had a shot on target in the first 45, and the best chance came with seconds on the clock.

Graham Burke saw a shot bounce slowly past the far post after he attempted to catch Lee Steacy off-guard. There would then be a lot of passing sideways and giving up possession from both sides, with no one trying to take the game to the opposition.

The Hoops thought they’d opened the scoring when Gaffney controlled a cross from the left and pummelled the ball past the Longford ‘keeper. However, keen eyed referee Ray Matthews spotted that he had taken the ball down with his arm.

The second-half contained just a tad more excitement. Burke should have put Stephen Bradley’s men ahead with a shot from around the penalty spot after a pullback from Scales. The low finish edged agonisingly past the post.

It seemed as if it would be a day of frustration for the Dublin outfit, as they controlled the ball, and De Town didn’t even vaguely threaten putting anything on the scoresheet.

However, time ticked on into what is now dubbed ‘Bradley time’, with five minutes added.

A ball in from Mandriou on the left caused chaos in the home box, Lee Grace dived in with a header, but Steacy pawed the ball clear, but only as far as the onrushing Gaffney.

Bang! The big number 20 can seemingly only blast the ball into the net. There was no stopping his shot into the Longford net. Rovers had grabbed victory at the death once again.

Stephen Bradley will be pleased that his team stuck with it and got the result. For Daire Doyle, its another defeat, when they deserved a point, which will make it sting that much more.