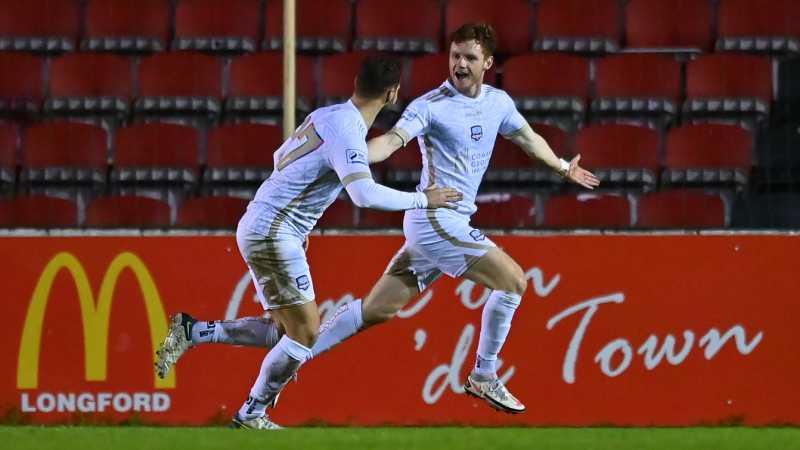 It’s all to play for in Eamonn Deacy Park on Sunday afternoon as this first leg of the First Division play-off semi-final ended in an entertaining draw.

Twice Jordan Adeyemo put the home side ahead but twice Galway substitute Mikie Rowe brought his side back into the game. The post denied Adeyemo in the first half and Stephen Walsh in the second. Town keeper Luke Dennison pulled off an excellent save to deny David Hurley at the end.

For all their possession Galway didn’t make Dennison work too much in the opening half. Darren Clarke had the first chance of the game; his long range shot was parried by Galway keeper Conor Kearns in the third minute.

Walsh came close for the visitors one minute later but his effort was just wide. Galway dominated but failed to create clear-cut chances.

The home side began to come into the game but had some wayward passes. Clarke caused problems down the wing. In the 29th minute his pinpoint cross was headed to the net by Adeyemo.

In the 35th minute the two combined again with Adeymo’s glancing header coming off the post. As the half wore on Galway pressed for a goal but the Town defended well to go in at the break in front.

Rowe was introduced for the injured Ed McCarthy at half-time and it took him five minutes to make an impact for his side. Walsh crossed for Rowe to finish to the net. Walsh then hit the post with his shot in the 53rd minute.

Town went back in front in the 55th minute; Clarke with the ball in and Adeyemo with the finish. Former Town player Rob Manley came on as a sub in the 59th minute and three minutes later his effort was saved by Dennison but Rowe pounced on the ball and it went in off the post.

Karl Chambers dinked his way into the box in the 79th minute, he took a shot but it somehow stayed out and was then deflected out for a corner. Hurley brought a save out of Dennison at the end as it stayed deadlocked.