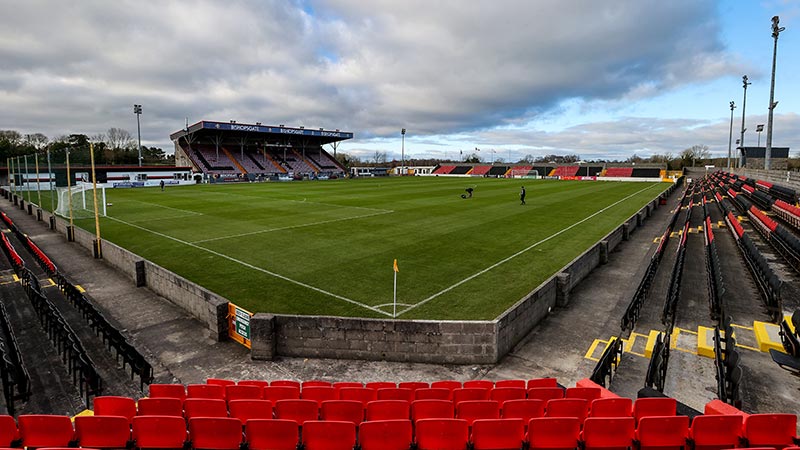 Longford Town and Finn Harps played out a scoreless draw at Bishopsgate, to earn a point each after both sides bounced back from their narrow weekend defeats.

In truth, neither side deserved to win the contest and a draw was a fair result.

Longford almost opened the scoring in the tenth minute with a good move down the left, as Sam Verdon and Aaron Robinson exchanged passes creating space inside the box for Verdon, but his low diagonal shot went just wide of the Harps far post.

The visitors had two excellent chances in as many minutes.

On 27 minutes the McNamee brothers, Barry and Tony, combined down the right with the latter’s cross finding striker Sean Boyd, but he headed narrowly over the Longford bar.

Two minutes later, the visitors almost took the lead, after a great pass from Barry McNamee put in Boyd.

Boyd turned Town defenders O’Driscoll and Gorman brilliantly, only for his shot to be superbly saved by homeside keeper Mick Kelly, however, the ball came out to Tony McNamee, but he ballooned his 16-yard shot over the Town bar.

Three minutes after the resumption a shot from Ethan Boyle on the right side of the box was well saved by Town keeper Michael Kelly.

34 minutes elapsed without a clear opportunity for either team, and then each side had a chance within two minutes of each other.

Longford Town had the first of those chances on 82 minutes as Aaron Dobbs ran onto a long ball and lifted the ball over the advancing Harps keeper Mark McGinley but the ball went wide.

Two minutes later, it was the visitors who came close to breaking the deadlock as a Ryan Shanley 25-yard shot deflected off a Longford player and just cleared the Town bar.