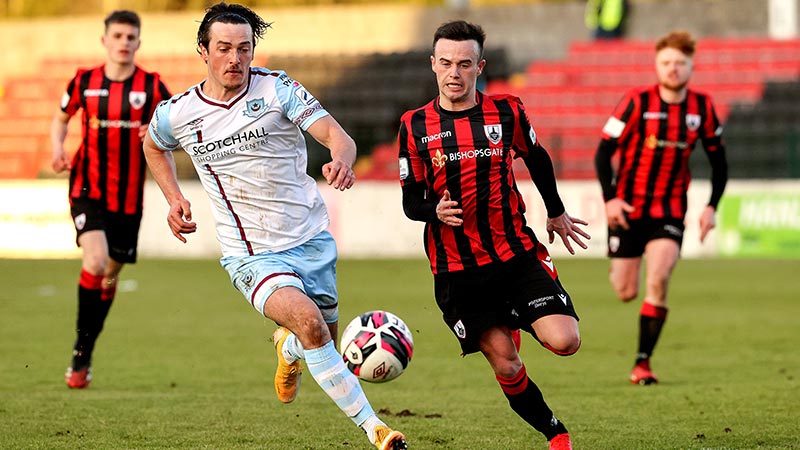 Drogheda United left Bishopsgate with all three points tucked firmly under their collective arms after a 'Tour De Force' performance from Mark Doyle saw them hit Longford Town for four goals - three of them coming in 16 second-half minutes, to secure the away victory for Tim Clancy's team.

Longford had the better of the early exchanges with Dylan Grimes peppering Drogheda United's goal with a decent long range efforts. His free kick put Drogs keeper Colin McCabe under pressure, but the former Shelbourne man made a vital intervention and thwarted the attack.

In a sign of what was to come for the majority of the game Chris Lyons threw himself at a low drilled cross from Mark Doyle on the left wing, but his lunge falls just short of the ball.

From that early showing it was all Drogheda as Doyle, Lyons and Darragh Markey as they grew into the game with another fantastic ball from Doyle finding the feet of Markey in a little bit of space in the Longford penalty area. It took a great block from Aaron Bolger to stop the attack as his team mates regrouped and cleared the immediate danger.

Grimes once again proved to be the biggest threat for the hosts, with two long range efforts in quick succession but these efforts just blazed inches past the post and McCabe's crossbar.

The deadlock was finally broken on 35 minutes when released by Markey, Doyle cut through the defensive cover on the edge of the Longford box, he cut the ball back and a save from Steacy forced the ball up in the air where Chris Lyons sent it goalward.

Clipping the crossbar it fell to Markey, who was a yard out but couldn't force it home. However, Doyle followed up by powering the ball to the back of the net in the resulting goalmouth scramble.

Each side created one further chance, and both were from very predictable sources. Grimes forced a top notch save from McCabe; before Doyle got on the end of a move he started himself, but the legs of Steacy blocked and smothered the ball for the home side. This ensured just a single goal separated the sides at the interval.

Any hopes Longford had of getting something out of the game were ended early after the restart when Lyons got himself on the end of a great cross from James Browne. Decent work from Doyle and Markey released Lyons and he aimed his cross into the Longford penalty area.

Lee Steacy misread the flight of the ball and came to gather but when an outstretched foot from Lyons made contact with the ball it was simply to guide it into the empty net.

Longford felt they had pulled one back when Joe Manley got his head on a corner at close range. When the group of players dispersed, McCabe was holding the ball on the line. The referee waved away the strong appeals from the home side that the ball had crossed the line.

On 56 minutes the game was over as a contest. In a mirror image of the build up of the third goal Drogheda United's other wing back, Conor Kane, wanted to show that he could match Browne's forward threat. He latched onto a loose ball, tore down the wing and sent a pinpoint accurate cross to the head of Doyle who buried the opportunity.

Hugh Douglas put the icing on the performance when he got his head on the end of Ronan Murray's free kick to add another to the scoreboard, in the highest scoring performance in the Premier Division so far this year.

Drogheda United manager Tim Clancy will be delighted with the performance of his attack with Lyons, Markey and particularly Doyle unplayable at times this evening.