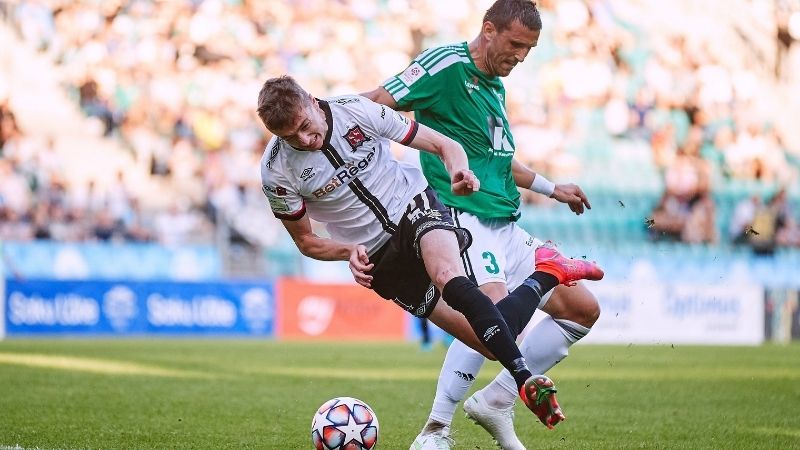 Will Patching's 92nd minute winner, ensured Dundalk advanced in the Europa Conference League, as they knocked out Estonian League leaders Levadia Tallinn at the A Le Coq Arena this evening.

The victory ensures they face Dutch side SBV Vitesse next week, despite falling a goal in arrears in this away clash..

Dundalk responded well and managed the game with ample possession but it was once again the execution at key moments that proved to be decisive.

There may have been a lot of changes for the Louth men, however, the experience by some came to the fore to overcome this tricky and tense tie. Patching will etch his name in history with late winner to send the Lilywhites through.

Dundalk started the brighter of the two sides but they were hit with another early goal that made the tie swing in Levadia’s favour. Ernest Agyiri broke free down the left and hit an absolute fantastic strike from the edge of the area that rifled into the top of the net. This made it advantage Levadia but it was Dundalk who responded the brighter.

Sam Stanton moments after the goal had a strike that cannoned off the crossbar while Patrick McEleney tested Karl Andre Vallner gloves with a low struck effort. It looked as if Levadia would go into the half ahead only for David McMillan to score his 14th goal in European football.

Greg Sloggett collected the ball in the area and despite the shot being on for the midfielder, he laid it off to McMillan whose low effort left Vallner flat-footed and the Lilywhites equalised just before halftime.

The second half was a tight and close-knit affair with Levadia more alert to the danger of the visitors attacking threat. With a corner, the hosts had numerous half-chances on goal but none of them tested Abibi. For Dundalk, Greg Sloggett got the ball 40 yards from goal but his effort was well saved by Vallner.

As the game headed towards the ninety McEleney had a chance to win it as he collected the ball on the edge of the area but his curling effort just went wide of the far post. Dundalk left it late to snatch the winner as Will Patching latched onto a loose pass and he calmly fired the ball past Vallner to seal the tie for the Lilywhites.

Vindication for a man who was left out in the cold last season, life comes at you fast.