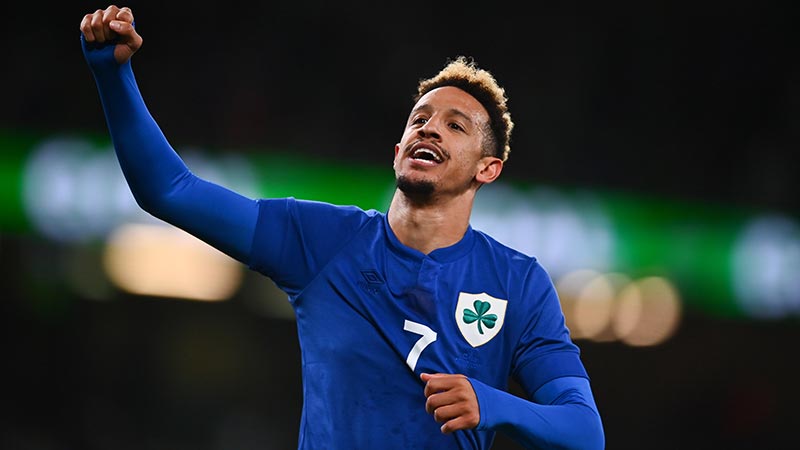 The Republic of Ireland recorded their first back-to-back wins for the first time since March 2019 as Callum Robinson was the Irish hero at the Aviva Stadium.

Fresh from his two goals last time out, Robinson grabbed his first international hat-trick, followed by a captains goal from Shane Duffy; that ensured Ireland saw off Qatar with a 4-0 win at the Aviva Stadium.

In what was an impressive display from Stephen Kenny’s squad, this paves the way for an exciting encounter with Portugal next month that they will head into full of confidence following tonight's performance.

As was expected Ireland made five changes to the starting line-up with Kelleher, Stevens, Hourihane, Ogbene, McGrath coming into the matchday squad.

The hosts got off to the perfect start, as Robinson netted his first goal of the evening just three minutes into the contest. He latched onto a pass on the edge of the area before hitting a high curling effort that beat Barsham at his near post.

Ireland continued to press forward and got their second goal after Jamie McGrath was taken down under a heavy challenge from Alrawi, with the referee awarding a penalty. Robinson stepped up to send the Qatar net-minder the wrong way and give Ireland an early commanding two-goal lead.

John Egan and Chiedozie Ogbene both had chances to add their names to the score sheet. The best of which fell to Ogbene whose powerful header cannoned back off the crossbar.

Robinson started the second half much like he began this first, as he grabbed his hat-trick following a clever low through ball by Jeff Hendrick that saw him run onto the pass and slot it calmly past the keeper.

Shane Duffy was next to get his name on the score-sheet as he headed past Barsham with a powerful header from a Conor Hourihane corner.

The game lost its pace as both sides opted to bring on replacements with each team pressing forward in fleeting moments, Hendrick had the best of the late opportunities but his effort went high over the bar.

During the course of this game, the fans chanted 'There is only one Stephen Kenny' as fans begin the see the fruits of very difficult labour.

They are invested in this long term project with Irish football beginning to see the benefits from this side.