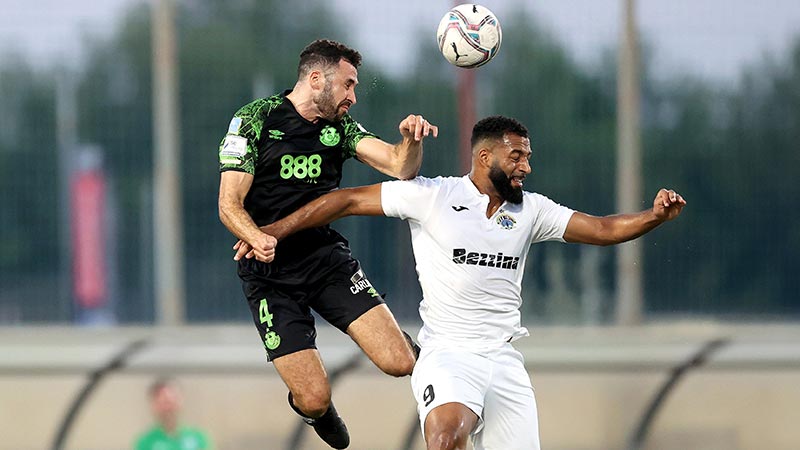 Shamrock Rovers booked their place in the second qualifying round of the Champions League for the first time since 2011 when they played out a scoreless draw away to Hibs of Malta.

Leading 3-0 from the first leg, Rovers were comfortable throughout. Neither keeper was called into making a save of note until stoppage time when Mannus saved from Degabriele. Jurgen Degabriele had the best chance of the first half; he blasted the ball over the bar in the 45th minute while in the 80th minute Rory Gaffney dragged his shot wide.

Manager Stephen Bradley was able to introduce Jack Byrne as a sub in the 77th minute.

He was also able to have Graham Burke on the bench too after they both returned from injury.

The home side made three changes from the first leg in Tallaght. Ayrton Attard, Jack Grech and Terence Groothusen all started. Groothusen was unlucky not to get on the scoresheet in Dublin and make the tie in Malta more interesting

Hibs put in a few crosses into the box but nothing to trouble Rovers. Roberto Lopes directed a header over the bar in the 14th minute for Hibs’ corner.

Rovers were comfortable but didn’t create anything of note. In the 29th minute, Rory Gaffney found Dylan Watts but Rodolfo Soares got back to make a good challenge.

The home side had two chances before the break. The first real scoring opportunity came in the 45th minute and it was the best chance of the half; Gabriel Izquier Artiles put a great cross into the box and Degabriele blasted his shot over the bar from close range. Minutes later Jack Grech had a half-chance as the sides went in scoreless at half-time.

Substitute Richie Towell put the ball in the net in the 66th minute but it was ruled out for offside. Rory Gaffney had a great chance to break the deadlock but he dragged his shot wide in the 80th minute.

Hibs looked to get a consolation goal in stoppage time but Mannus saved from Degabriele.