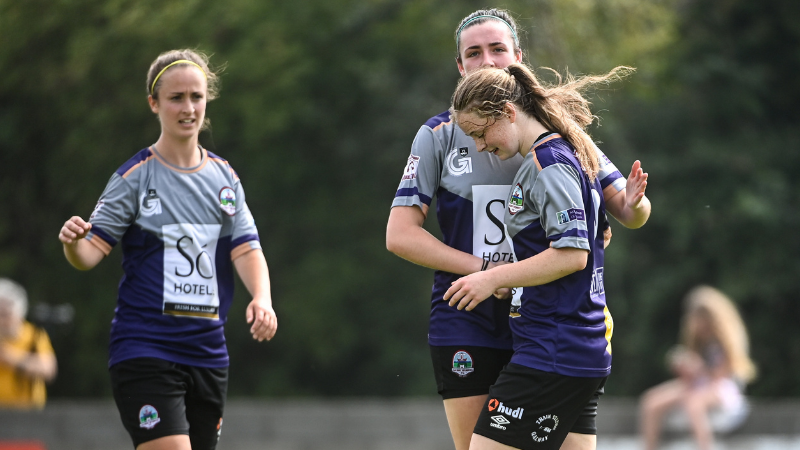 Chloe Singleton bagged the only goal of the match in Eamonn Deacy Park to scrape Galway WFC past a lively DLR Waves and into the semi-finals of the Evoke.ie FAI Women’s Cup.

A nip and tuck game to the nail biting end there was some fantastic football on show from both strike forces, but it took substitute Singleton’s dynamic and authoritative runs to open The Sky Blues up.

Her effort came in the 84th minute as she was just over 10 minutes off the bench but her rapid impact was felt immediately down the flanks of the Westerner’s home ground.

From the bounce it appeared as if Rachel Kearns, Emma Slevin and Emma Starr were to rule the roost in this match the entire opening quarter accredited with their brilliant confidence on the ball.

Waves grew into the game as time surpassed Eve Badana making some crucial saves to keep them in it, Nadine Clare and Rachel Doyle’s presence ever prominent in attack.

The majority of the notable opportunities surfaced from set pieces in the first 45 minutes, both Becky Walsh and Slevin coming ever so close with headers.

The Tribeswomen would have felt hard done by not to have earned themselves a penalty with multiple claims gone unrewarded, meaning things went into the interval all square at 0-0 a piece.

Intensity ramped up in the second half as the passion and knockout nature of the cup percolated into the fixture, Jessica Gleeson a brick wall at the back for DLR.

Her efforts were sidelined as futile when Singelton made her way onto the pitch, splitting open the barricade with ease and an injection of pace.

She came near a few minutes prior to shattering the stalemate, playing in Slevin who was just inches from poking the ball into the net.

Whatever the manner however Galway will have been elated to depart the occasion with the triumph, sending them into the semi-finals with Shelbourne, Wexford Youths and either Peamount or Treaty United.