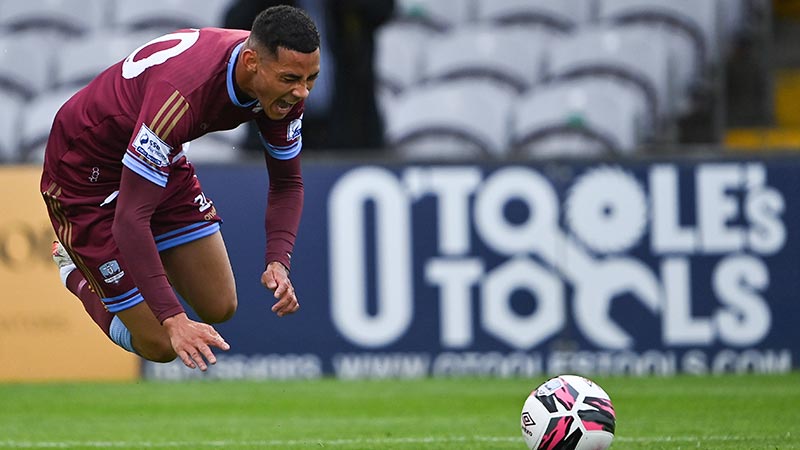 Two goals for Galway United nullified Cobh Ramblers at Eamonn Deacy Park this evening and saw them pick up their fifth win on the bounce in the League of Ireland First Division.

Ruairi Keating’s first half penalty was the only score of the opening 45 minutes. Wilson Waweru nabbed the second goal in the 52nd minute to expand the cushion, although in all reality United ought to have run more rampant.

That said, sitting at second place in the table every point is vital to John Caulfield’s men who would have been delighted to gather all three today to see their accumulation move to 31 for the season.

With top spot Shels also having drawn with Treaty United this evening the gap between the two sides has moved to just six points, making things very exciting for Galway heading into the remainder of the season.

Cobh put up a tough exterior early in the game which United probed at consistently, the opener coming when Mike Place was clipped down in the box after he had broken away and looked certain to score.

Keating converted that chance but it was testament to both The Rams’ defence and the home sides lack of tenacity on the final ball that it remained 1-0 at the halftime break.

Place, David Hurley and Gary Boylan were all dangerous in The Tribesmen’s attacking threats, but it was Waweru who was next to get on the scoresheet as he took a pop at an acute angle and his effort paid dividends with a goal.

From there it looked inevitable Galway were to assemble a melee, more as they drove forward in numbers, but to no avail.

They did however show just why they are as high in the table as they are when they rolled on substitutions like Shane Doherty, Padraic Cunningham, Joe Gorman and Shane Duggan, demonstrating the strength and depth in their squad which will be useful going forward if they are to pose a besiege on The Reds at the summit of the table.