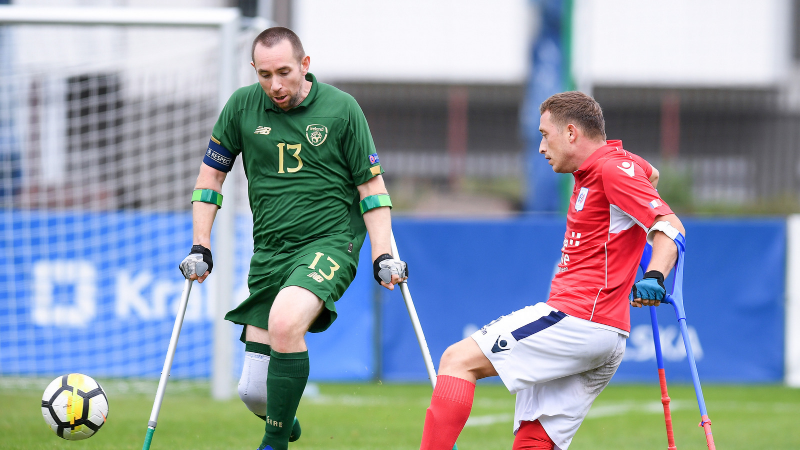 The Republic of Ireland amputees concluded their campaign in the EAFF European Championship 2021 in 8th place after a 1-nil loss against France at the Garbarnia Stadium, courtesy of Billy Lunaschi’s lone goal.

Christy McElligott's boys were eager to prove some injustice in their previous results during the tournament in Kraków, by fully dominating the first 25 minutes.

France reacted in the second period, taking advantage of Lunaschi’s goal to hold the seventh spot which they brought from the previous competition in Turkey at Euro 2017.

Mickael Mavali was the first to bring some action close to the goals, with Irish goalkeeper Patrick Hutton coming off to save brilliantly.

James Boyle, the Boy in Green constantly looked for by his teammates up front, saw his powerful shot from a free-kick being cleared off the goal line by Marian Sacacol.

Ruairi Murphy was the next testing Kevin Roger from the right-wing, but the French keeper having no problems in holding it.

On the other side, the clash of Hutton vs. Mavali had another chapter, and yet again with the same ending as Hutton kept the Irish goal safe with a class slap.

Boyle had on his foot on the last opportunity before the break, by sending off what would be an astonishing acrobatic goal.

The Gauls returned with a whole different attitude from the dressing room, creating serious danger close to Ireland’s goalmouth early in the second period.

Tristan Diaz brought an immediate opportunity as he missed a clear chance inside the Irish box to dismantle the 0-0.
Billy Lunaschi showed more accuracy in the 35th minute as he put France in the lead with a finish from inside of the box.

After Lunaschi’s second yellow card, the Boys in Green came forward in power looking to force extra-time; Kevan O’Rourke came the closest to accomplish it as he hit the target with a power full effort, cleared away by Kevin Roger who held France’s seventh place until the end.