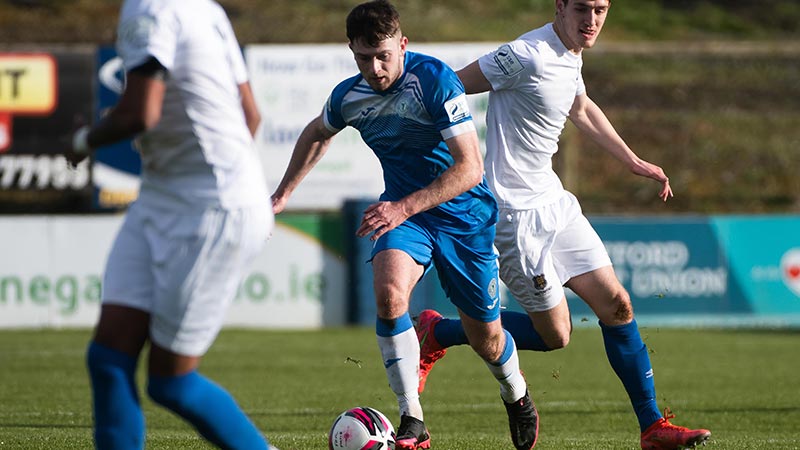 Waterford secured three vital points at Finn Park, as they ran out 1-0 winners to boost their survival bid and reduce the gap between the two sides to just four points.

Debutant Quitirna Junior Armando sent the keeper the wrong way from the spot just before half time, before the hosts squandered their opportunity from the spot as Barry McNamee’s poor penalty was saved.

Waterford goalscorer Armando had only signed for the club earlier that day, alongside new arrivals Eddie Nolan, Jeremie Milambo and Anthony Wordsworth.

Finn Harps were the better side in the opening period and created a good chance for striker Sean Boyd, but his audacious overhead kick sailed over the crossbar.

The home side’s top goal scorer Adam Foley played a neat one-two with Boyd, with Foley going through one on one but Waterford goalkeeper Matthew Connor was quick to react.

Connor continued to struggle with Barry McNamee’s corners and required the help of his teammates heading the ball off the line, to keep the scores level.

On the stroke of half time, Waterford went in front, slightly against the run of play but Jordan Mustoe was judged to have handled the ball in the box and the referee pointed to the spot.

Debutant Armando stepped up to take the penalty and coolly dispatched it sending Mark McGinley in the Finn Harps goal the wrong way.

At the start of the second half, the home side were awarded the perfect opportunity to level the scores as Sean Boyd was judged to have been fouled by Eddie Nolan in the penalty area.

Playmaker McNamee stepped up to take the spot kick but his effort was poor and was well saved by Connor.

Finn Harps failed to create any meaningful clear-cut chances in the second half and Waterford held on for a huge victory.

The win takes the visitors up to 16 points, but the Blues remain in ninth place and in the relegation play-off position, four points behind their opponents who remain in eighth.