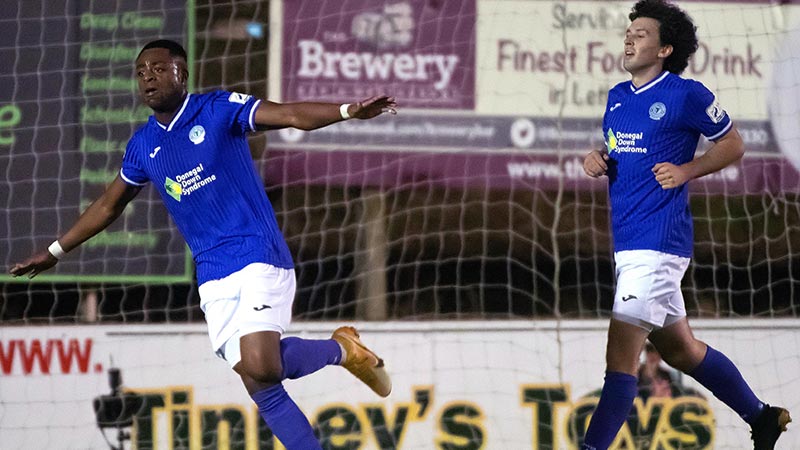 Sean Boyd was the hero for 10-man Finn Harps as his late brace of goals snatched a 3-3 draw with Dundalk, and a lifeline in the FAI Cup this evening.

The sides will meet again next week in a replay following a thrilling contest at Finn Park.

Dundalk looked to be in absolute cruise control coming into the latter stages of the contest but Harps late rally spearheaded by Boyd has ensured their conquest for a semi-final is still intact.

The hosts were in a buyout mood and took the game to Dundalk as Babatunde Owolabi looked to get his name early on the scoresheet with a series of chances. On his third attempt on the Dundalk goal he hit the mark, Barry McNamee gave a clever little pass to Owolabi in the area who picked up the ball and with a first time shot slammed it under Cherrie who had was left with no chance. The lead would only last four minutes and the momentum would shift for the way of the Lilywhites.

Pat Hoban struck a low effort that Mark McGinley pushed away and Sean Murray was on for the follow-up effort but his low effort was blocked on the line by Jordan Mustoe with the ball striking his arm.

The referee felt he had no option but to give the red card and a penalty. Hoban despatched the penalty with ease and it was Dundalk who began to up the tempo. They got their just rewards for their increased pressure as Sean Murray struck his tenth goal for the club as he received the ball in the middle of the park and he hit a low effort, it seemed to have caused McGinley to sidestep the wrong way and the ball evaded his outstretched hand.

Dundalk looked to have put the contest to bed as Patrick Hoban grabbed his second goal of the game as he headed past McGinley to give Dundalk a commanding two-goal advantage. But there would be late drama as Sean Boyd who came on midway through the second half for the Harps would have a big say in this tie.

Boyd struck two late goals, with his first seeing him tower over Peter Cherrie to head past the Dundalk keeper to reduce the deficit to one as the sides headed into added-on time and with the final kick of the game, he struck a low effort past a sea of Dundalk players to equalise and send Finn Park into hysterics.

In a fleeting moment, the momentum swung away from Dundalk and back to Finn Harps as the sides will meet again next week to see who will progress to the semi-final, who that will be is anyone's guess at this point.