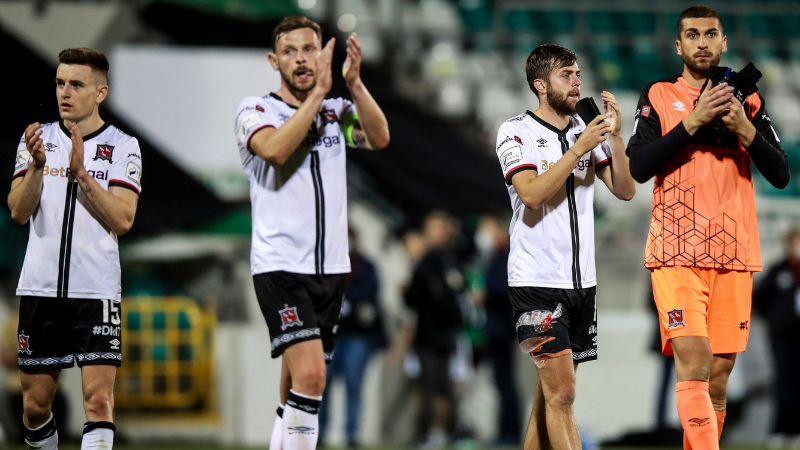 Dundalk’s Europa Conference League campaign came to an end following a spirited effort against Vitesse Arnhem as the Lilywhites lost 2-1 in a contest that Dundalk will feel they left something behind on the Tallaght Stadium pitch.

First-half goals from Matus Bero and Yann Gboho gave full advantage to the visitors as Dundalk were left to rue a plethora of missed chances despite Patrick Hoban’s giving the fans and the side hope in the second half the efforts were futile as the experienced Dutch side saw the game out despite the late rally from the home side.

It looked as if Dundalk were in dreamland after just 40 seconds when Michael Duffy broke free and slotted under Markus Schubert that sent Dundalk fans in delirium. However, it was short-lived as the effort was ruled out for offside. Dundalk continued to press but it was the away side who were more composed and assured on the ball and began to show their quality. Dundalk had two great chances to go ahead, Pat Hoban’s shot on the edge of the area following by Patrick McEleney saw Schubert deny them both with fine saves.

The away side then took control of the tie with two goals put them in cruise control. Nikolai Frederiksen initial shot was blocked down by Boyle and Abibi could only parry it back and the ball was tipped in by Matus Bero at the back post. While the first had some fortune to it, the second was routine as Vitesse collected the ball down the wing and Yann Gboho slotted it calmly past Abibi.

The second half saw Dundalk make initial inroads but to no avail, Will Patching’s cross was met at the back post by Duffy but it went wide followed by McEleney going close from a corner. However, Vitesse looking to close the game down deployed more defenders to see the game out. It looked as if the game was going to run out in a damp squib only for it to spring into life. Duffy was fouled in the area and the referee pointed to the spot, Hoban stepped up and despatched the penalty with ease.

Schubert would deny Duffy again as he tipped his excellent effort over the bar and from the resulting corner it looked as if Jurkovskis had scored only for Schubert to deny him on the line. McMillan had a chance right on the 90 as he slid in to try and convert Kelly’s cross but it just missed him by inches. That was the chance that will haunt the side.