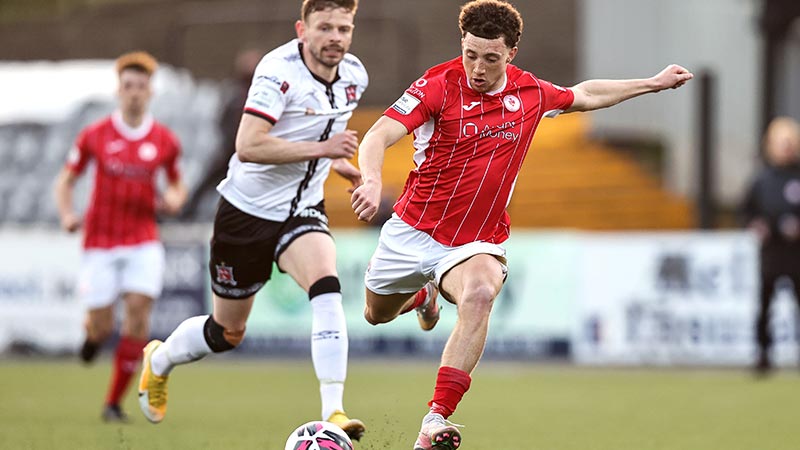 Dundalk suffered defeat at home to 10-man Sligo as Jordan Gibson’s solitary strike, in a game of little clear cut chances; proved to be decisive tonight at Oriel Park.

Despite losing a man early in the second half, as Garry Buckley was shown red for two yellow card offensives the Bit O'Red looked the more comfortable.

Dundalk had plenty of opportunities and possession, but they rarely tested Ed McGinty in the Sligo goal until the dying minutes of the game.

This result sees Dundalk nine points adrift of Sligo as now the mountain to climb is the race for Europe. Even at this early stage of the season.

The opening exchanges saw both sides test the hands of the respective goalkeepers. Walter Figueria hit a speculative effort on the edge of the area that rattled off the crossbar, but the effort left Peter Cherrie rooted to the spot.

Dundalk responded with Han who did brilliantly to win the ball back, and he laid it off to Junior but his shot was straight at McGinty. Johnny Kenny broke free of the Dundalk defence but the effort from the 17-year-old was well saved by Cherrie.

In a game of limited opportunities, it was always going to take something special to break the deadlock and it came thanks to Jordan Gibson. Dundalk lost possession as Boyle advanced for the ball, and Sligo capitalised with Gibson turning excellently and letting fly from 30 yards - that left Cherrie with no chance.

Sligo were reduced to ten men following a second yellow card for Garry Buckley on the restart. This gave Dundalk some licence to push forward, however Liam Buckley’s side were organised to stop all that came in their wake.

Sean Murray laid the ball off to Daniel Kelly, but his effort went over the bar. Micheal Duffy had an excellent opportunity to equalise but it went wide.

Dundalk did test McGinty in the dying minutes of the game, as Zahibo had two opportunities for the Lilywhites; but both were handled excellently, as the away side held firm to take the three points back to the Showgrounds.

Dundalk once again are left with plenty to ponder, as to how to get a winning run together as they hope to maintain some sort of push at the top of the table.