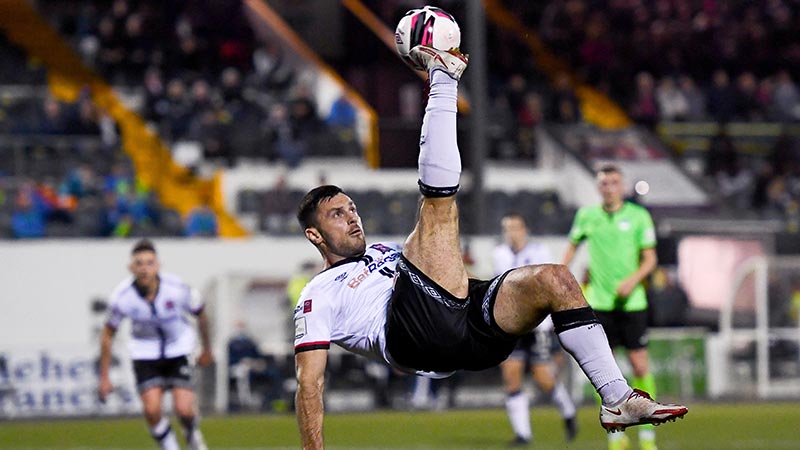 Dundalk secured passage to the FAI Cup Semi-Final thanks to an extra-time win over Finn Harps at an action-packed quarter-final replay at Oriel Park.

Sean Boyd got Finn Harps off to the perfect start with a goal after five minutes before Sean Murray got the home side level late in the first half.

The Lilywhites who were down to the bare bones used their experience to take command of the tie with goals in extra time from Pat Hoban and a goal to remember from Michael Duffy.

Harps took the game to the visitors and got their just rewards as they silenced the large Oriel Park crowd as Ryan Rainey's clever through ball saw Sean Boyd beat the attention of two Dundalk players to rifle his effort past Cherrie to put Harps in the lead.

The away side sensing Dundalk’s hesitancy continued to press high and Barry McNamee had the best opportunity to add a second as his long-range effort was well saved by Cherrie on the second attempt. Babatunde Owolabi also had a chance to add his name to the scoresheet as he beat Mayowa Animasahun for the ball but opted to take his shot on his right and in doing so sailed his effort over the bar.

Finn Harps would live to rue those missed chances as Dundalk dragged themselves back into the tie thanks to Sean Murray. Pat Hoban's bicycle kick into the six-yard box which looked almost certain to be cleared by the Finn Harps defence found its way to Sean Murray, who toe-poked it past Ger Doherty to equalise.

The second half saw both sides trade blows but that vital knock out blow never came, the closest either side came was when Peter Cherrie was excellent to deny both Boyd and Babatunde Owolabi from close range, the first effort was pushed onto the bar and the follow up was a fine low save.

The game went to extra time and Dundalk were awarded a penalty in the early stages as Sami Ben Amar went down under a challenge from Dave Webster in the area and Ben Connolly pointed to the spot. Patrick Hoban from the penalty spot placed it past Doherty with power and direction.

Right on the stroke of half-time in extra-time, it was checkmate Dundalk as Duffy struck a sensational free-kick that Doherty had no chance of saving to book Dundalk into their seventh semi-final place in a row.