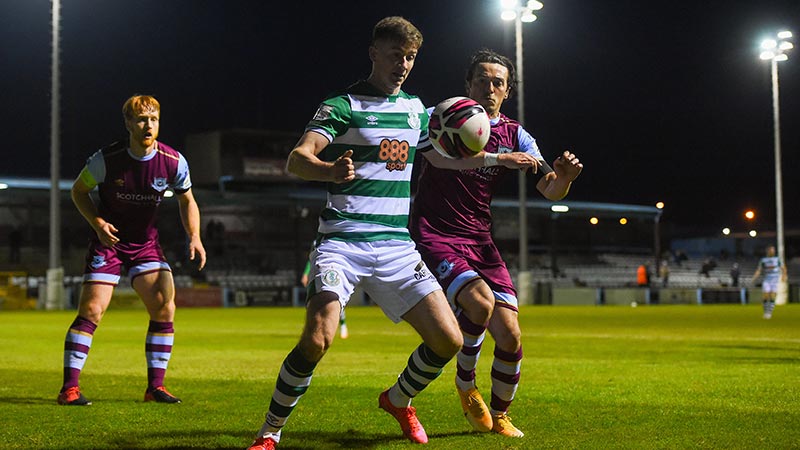 Danny Mandriou delivered late for Shamrock Rovers, with the games only goal, and his second of the season, as the Dublin side claimed a hard-earned win away over Drogheda United.

In a game that ebbed and flowed and at times, tempers flared, it was the Rovers team who, yet again, pushed right until the end of the game who finally broke Drogheda resistance with a header from Mandriou five minutes into extra time.

Gary O’Neill started the game brightly in the centre of midfield, and alongside Ronan Finn; they dropped deep to act as a type of quarter-back looking for that key pass from midfield.

Dylan Watts was dangerous from general play, and he whipped in a great cross which was just slightly too high for the waiting Aaron Greene in the penalty area.

Drogheda, who had set up in a very organised fashion, were quiet for the first ten minutes until Mark Doyle intercepted a loose pass in midfield and drove at the Rovers’ defence. However, his cross was deflected into the arms of Alan Mannus.

Drogheda had dangerous phases of play, epitomised by a brilliant cross from the impressive James Brown on the right hand side right for the hosts, which almost found the head of Mark Doyle just before the interval.

A common feature on the night for Rovers was a crossfield switch of play, which aimed to stretch the Drogheda defence out of position.

Sean Gannon got in behind the Drogs rear-guard with one such pass in the opening half, but his first-time cross was easily caught by Colin McCabe.

Later, the keeper came out for a high ball which broke free to Rory Gaffney whose shot was cleared off the line by Ryan O’Shea.

The best passage of play for Rovers in the first half was a great dribble from Gaffney on the left wing, linking with Finn who crossed the ball across goal to Gannon whose shot was cleared wide for a corner.

Rovers had a let off early in the second half, as a backpass from Kavanagh was not anticipated by Liam Scales who had dropped off. This almost allowed Lyons in on goal.

As Rovers pushed harder to find the net, Mandriou was brought on in the 73rd minute, and he almost had an immediate impact.
His lovely pass found Graham Burke in space in the box, but the keeper smothered the shot and Rovers won a corner.

The visitors exerted further pressure with Dylan Watts, who played well all game, whipping in a cross from the right and put it in front of Greene in the box but he failed to connect.

As the clock wound down to what appeared to be a draw, there was a rash challenge by Dane Massey on his former team-mate Sean Gannon, before Watts delivered an inch perfect cross for Mandriou to head home.

The Rovers bench and players were ecstatic. The Drogheda players were crestfallen, having brought so much energy and quality to the contest.