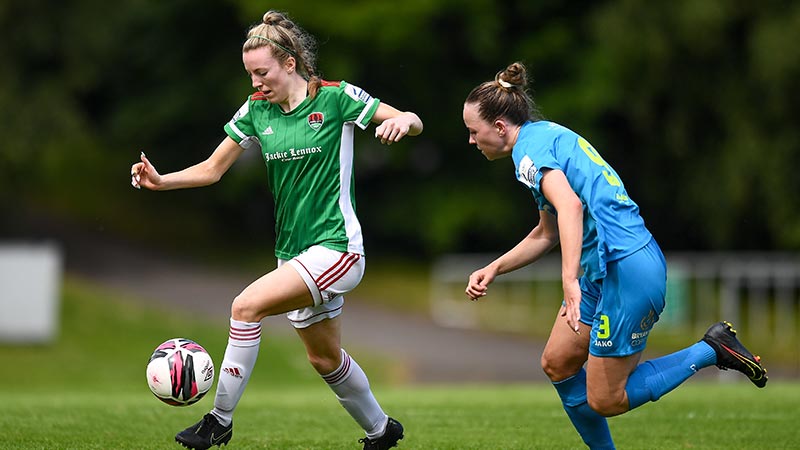 A dramatic finish by DLR Waves ensures they are chasing a spot among the top-3, by beating Cork City 1-nil, thanks to a Ciara Maher goal in the 88th minute.

This was a sucker punch for the visitors, who where the best side for the big majority of the game and saw all three points running away in the final embers.

From early doors it became hard to believe Cork was the underdog this afternoon; as they clearly showed their intentions from the kick-off.

Christina Dring brought the first big threat to Eve Badana’s goal in the fourth minute, as she was incapable to balance the net, with the Waves goalkeeper completely out of the play.

The Rebel Army kept looking the Dubliners right in the eyes; Ciara McNamara tried her luck from long range, forcing Badana to go down to stop it.

Dring tested Badana once more, this time with a header from inside the six-yard box, but the keeper refused to see the score changed.

After the first 30 minutes with both teams coming back and forward, the tight ship was kept at the back for the visitors as they became more aggressive upfront, as Rebel as they are; the 32nd minute saw Eva Mangan sending in a powerful shot, stopped yet again by Badana, pushing the scoreless through the break.

The second 45 minutes started lively; Sophie Liston saw her ball going out after kissing the right post, before a scrambling ball inside Abby McCarthy’s box was booted away by the defence.

The matters became unpredictable, with the woodwork being tested on both sides: A corner coming in from the right ended up coming off Cork’s crossbar, as Sarah McKevitt’s shot from the edge of the box smashed Badana’s left post.

The changes brought by the Waves left Cork in difficulties at the back during the last fifteen minutes, exposing some lack of experience on the green outfit.

And when it all seemed to point out for a final tie, the substitute Ciara Maher sent it a stunner outside the 25-yards, a shot coming from nowhere taking Abby McCarthy by surprise.