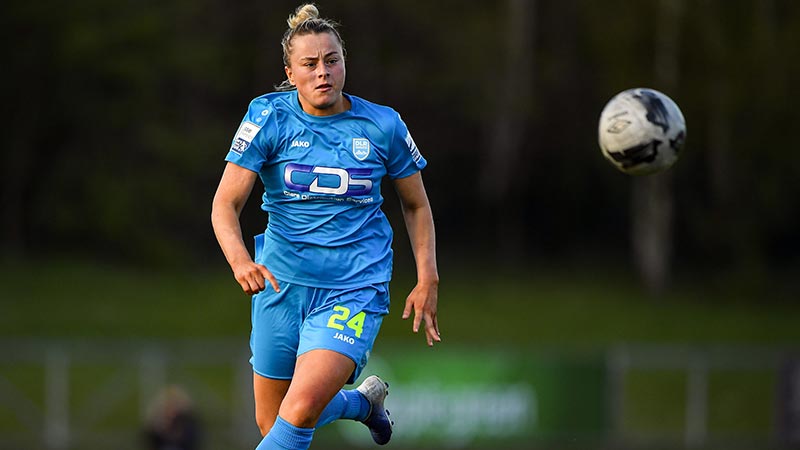 A controversial goal at the end of the first half from Rachel Doyle meant that DLR Waves took the three points against Bohemians at the UCD Bowl this evening.

A shot from the left wing seemed to be straight at Bohemians ‘keeper, Niamh Coombes, who parried onto the bar and attempted to catch at the second attempt. Kerri Letmon followed up with a challenge, leaving Coombes on the ground but the referee judged that the ball had crossed the line prior to the challenge.

This game began in a sloppy fashion, with both sides struggling to hold possession and playing plenty of long balls.

The first real chance fell to DLR’s Niamh Prior who picked up a loose ball from a corner and took a strike, but it was straight down the throat of Coombes.

There was higher tempo to the game on the restart, and DLR Waves seemed to be in control, limiting Bohs to very little possession.

Both teams came out for the second half and showed fighting spirit with some heavy challenges. Some were judged as fair and others were not.

A great chance fell to the away side in 86th minute when Erica Burke found herself free in the box but forced her header wide from close range.

The Waves defence will be pleased with their performance after keeping the Bohs attack fairly quiet throughout the game.

Bohs will feel hard done by as they lost the game to a goal that they feel should not have been awarded due to the possible foul in the build-up. The ball also may or may not have crossed the line.

Nevertheless, nothing can be taken away from DLR who will be pleased to pick up the win after their loss against Shelbourne in their previous game.

One goal ended up separating the teams at the final whistle. This is much better than the two previous encounters that both ended in stalemates.